Time Released Sound offers some of the best limited edition packaging on the market, and Polarlicht is no exception.  My copy is housed in a brown film tin and looks like something Arctic explorers might have carried, hoping their photographic evidence would survive even if they might not.  This tactile and visual combination lends the release the air of the ancient.  The frozen tones add to the appeal.  Not only can one imagine the polar expeditions, one can hear them in the footsteps of “Duthaich”.  The music is frosty and crisp, a fine accompaniment to the coldness of the tin.

Open the tin and one finds a round map and a series of coaster-shaped cutouts, connected by string.  Now unlock the music.  Monolyth & Cobalt (actually one man, Matthias Van Eecloo, widely known for his collaborative endeavor, The Clyde Parker Project) calls it “a 62 minute imaginary soundbook”, which is a great way to describe the project.  Listening is the pathway to words rather than images: scrawlings in sketchbooks, diaries of doomed journeys: not a soundtrack, but the sound of tracks. 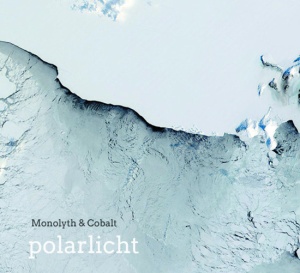 Suppose one just wants the regular edition, or even a digital copy.  Is it worth getting?  Absolutely.  Those in the southern hemisphere  will want it now, and those in the northern hemisphere may want to purchase it now and store it for the winter like a squirrel stashes a nut.  This is pure winter music, more ice than snow, more crampon than ski.  Polarlicht is the sound of an alluring, untamed and dangerous land, wrapped in white and shrouded in a sub-zero cloak.  At times the music is minimal: the synthetic tones of “Polar”, accompanied by wisps of wind across graveled snow.  At other times Monolyth & Cobalt fills the sound field like cold water in a crevasse.  Music box, cello notes and electronics add hints of warmth like hands rubbed together to survive.

In an Arctic environment, one attempts to read the sounds: the cracking of ice, the thickness of snow.  Any misinterpretation can lead to death.  While Polarlicht is never cruel, it is often indifferent; only at the very end does the album begin to melt.  “Birds (are some holes in the sky through which a man can pass)” sounds like the first hint that the ship locked in ice might once again begin to move.  All is not lost; the photos survive, as do some of the accounts, and now this evocative tribute.  (Richard Allen)