In the Garden of Sonic Delights

Arriving on the heels of last year’s Soundings exhibition at New York’s Museum of Modern Art is In the Garden of Sonic Delights, a new sound art exhibition located in Westchester County, New York.  Richard Allen reports on the opening day festivities.

Soundings was a huge step forward for the sound art community, as it was MoMA’s first exhibition of the kind.  This was a major coup for a wide field worthy of wider recognition.  But the central setting of Sonic Delights – the stunningly beautiful grounds of the Caramoor Center for Music and the Arts in Katonah, New York (30 miles north of NYC) make an even greater impression.  In Manhattan, one is surrounded by activity, and MoMA is a busy place; but to walk through fields and pavilions, surrounded by birds and bees and nary a car is to experience impressions of nature embedded in nature.

The exhibition exposes an undercurrent of irony.  As one encounters these Sonic Delights, one experiences the sound of nature in manipulated form, so that when the sounds fade, one may become more aware of sound itself.  In the evening concert, Francisco López distributed black blindfolds so that the audience could demonstrate a “full commitment” to listening.  His 40-minute piece began with avian cries before entering a more abrasive electronic period followed by the jolt of fireworks.  But when it ended, the audience could still hear the birds – soon realizing that these were now the real birds outside the tent that had not previously been noticed.

Sonic awareness may lead to many other categories, including enjoyment, appreciation, interaction, and in many cases even political activity ~ the protection and preservation of vanishing sonic environments.  But the first task is simply to listen.  “We are over-saturated with the visual”, lamented sound artist Suzanne Thorpe, “and under-saturated with the aural.”

Curator and artistic director Stephan Moore calls In the Garden of Sonic Delights “a playground for the ears.”  As a well-accomplished sound artist, software developer, installation designer and curator, Moore was a perfect person to plan the exhibition.  An obvious pride was in his demeanor as he introduced some of the sound artists at a panel discussion mid-day; by evening he seemed relieved and joyful as he enjoyed the culmination of six years of planning and hard work.  Finally able to relax, he joined longtime Evidence recording partner Scott Smallwood in offering the first part of the evening’s concert.  Presenting a mixture of field recordings and drone, the duo filled the tent with sounds familiar (a New York City train) and unfamiliar.

An earlier concert introduced visitors to the quartet of Eli Keszler (percussion), Lea Bertucci (bass clarinet), Leila Bordreuil (cello) and Reuben Son (electric guitar) as they performed a long, languid improvisation within Keszler’s speaker-and-piano wire installation, Catenary.  At times the pace was glacial – Bertucci later spoke of “an 8-minute glissando” – and at times frantic (as Kesler bent over his kit and tapped out off-kilter rhythms).  The audience was intent throughout, despite the expectation-shattering nature of the performance. 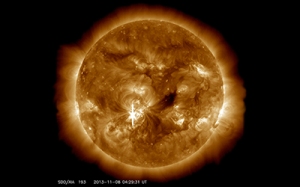 The opening day visitors were an eclectic mix of young families (a small yet noticeable portion), college and graduate students (a slightly larger number) and older patrons of the arts (who seemed game for everything, with a curiosity normally associated with youth).  The exhibition did exactly as advertised, inspiring delight.  The greatest delight arrived through interaction with the installations.  In some cases, visitors even interacted with non-interactive installations, jumping around and waving their arms just to be sure.  One visitor provided pointers on Annea Lockwood and Bob Bielecki‘s Wild Energy, a 50-minute loop of sub-sounds made audible through speed modification and amplification, telling me, “it activates when you lie down in the hammock.”  While this turned out to be untrue, the hammocks were a nice touch.  Lockwood calls the piece, which includes whales, thermal vents, solar oscillations and pine tree ultrasound, “a silken cocoon of vibration”.  Hearing the deep reverberations in the woods, my own reaction was “this is what it must have been like to hear dinosaurs.”  There was something in the woods, but what?  The installation translates the inaudible to the audible with a wink; the sounds are now audible while the sights are absent.

My traveling companion found the resonances of the Italian Pavilion to be inspiring, even after discovering that Stephen Vitiello and Bob Bielecki’s You Are the Sweet Spot offered an aural illusion (the sweet spot following the visitor) rather than a direct speaker-to-human conversation.  The taps of flats, the shuffle of soles, the echoes of dropped stones – every sound became part of the experience, proving that our very presence was increasing our sonic awareness.  I ran around Moore’s Diacousticon several times, prompting the surveillance cylinders to move, but the bells only rung three times.  (Moore later told me that I didn’t make them ring.)  Yet running also produced a strange acoustic effect, akin to an amplified drone – the result not of the installation, but of my own ears passing sound sources at an abnormal rate.

Bielecki is also involved in a third Caramoor work, as he helped Laurie Anderson to realize her vision of “water moving backwards” through the installation of We Fall Like Light, a twinned-spout fountain whose spouts appear to reverse (and spin like helixes) when strobe glasses are donned.  “Where’s the frog that makes them go backwards?” another visitor asked.  There was no frog.  Or was there?

Do birds, bees and other denizens of nature react to our presence?  They do, both more and less than we might predict.  Suzanne Thorpe‘s bat-inspired echolocation installation, Listening Is As Listening Does, attracted the interest of a local bat on its very first night – a good omen, according to the artist, as well as a compliment, as the piece is entirely composed.  “If you hear (bats), said Thorpe, “I faked it really well!”  Caramoor’s beloved bats have been disappearing at a rapid rate due to disease.  If this installation lures new residents – loved for their voracious appetite for mosquitoes – the Caramoor staff will feel particularly blessed.

Trimpin‘s The Pianohouse is one of the most playful installations: a little house made of piano innards and household instruments such as saws and hammers.  The piece, inspired by the Swiss clockmakers of the Black Forest, is activated by the pressing of a doorbell.  After the doorbell is pressed, one of several short pieces is presented, ranging from the melodic to the percussive.  Children were especially enamored with this installation, chanting, “again, again!”  The artist constructed the piece in Westchester County after finding donors willing to part with six old pianos, including the coup de grâce, a Steinway.  There’s no telling how long the piece will survive, exposed to the elements.  When the motors and other mechanisms wind down, according to Trimpin, “I suppose there will just be silence.” 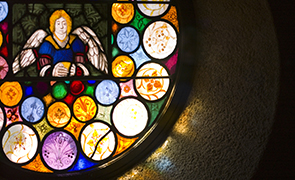 One of the most site-specific installations is located in the stunningly decorative Rosen House, honoring the founders of the estate.  A Walter Rosen piece plays silently on piano (the keys move, but offer no note-related sound).  A nearby speaker leaks static; Lucie Bigelow Rosen’s theremin falls back on itself; a series of speakers exudes a soft shell of whispers.  The concert may have ended, but the reverberations remain.  As one walks around the room, taking in the ancient tapestry, the clouded mirror, the sharply colorful stained glass circles, one feels surrounded by history and mystery.  This is a huge triumph for Francisco López, who along with all of the other presenters was allowed to choose his own location on the grounds, and chose wisely. The only drawback: no photos may be taken, in order to protect the art and preserve the mood.

Betsey Biggs’ Sunken Gardens (located, unsurprisingly, in the Sunken Garden) is one of the highlights of the exhibition.  The garden itself is extraordinary; one may enjoy its meditative, labyrinthine structure either with or without the headsets distributed at the entrance.  But those who don them will find the garden to offer an immersive sonic experience, akin to a sonic walk.  Rain, organ, subtle choir and prose segments from 20,000 Leagues Under the Sea are carried through induction loops, amplified in differing measure in different sections of the garden.  The piece is lovely; at the risk of sounding crass, I encouraged Biggs to release a recorded of the looped composition.  But to be fair, no recorded version can compete with the experience of walking through this work and pausing for meditation.

Another piece that works well as a composition, yet would be reduced by production in a finite form, is Scott Smallwood‘s Coronium 3500 (Lucie’s Halo).  This was my favorite of the ten Caramoor installations, a series of twelve metal “birdhouses” arranged around a large tree stump in a bright picnic area.  The birdhouses come to life early in the day as they are activated by the sun.  When a cloud passes over, they all fall silent, only to reactivate one by one as the light hits them again.  (Shading a birdhouse with one’s hands produces a “dying bird sound” that makes one sad and amazed).  Together, the twelve sets play a gorgeous electronic composition, chiming in tandem every ten minutes before returning to their generative patterns.

During the panel discussion, I asked if any of the artists had “snuck in to their own installations” in order to watch the responses of the visitors.  They had.  Lockwood was particularly interested “in the length of engagement and how they (were) listening”.  When visitors engaged in “extended listening”, she wondered if it was due to the piece or to the fact that Caramoor was “a really nice place”.  Her hope was that she could “entice people to calm down a bit” in order to engage.  Trimpin mentioned that an earlier version of his installation contained a 25-cent slot instead of a doorbell, and that “when people paid, they stayed”.  Ed Osborn (whose Palm House Transect is located in nearby Lyndhurst) spoke of the distant locations of many of the artists and their need to return home, sighing, “the people (who visit) will have far more fun with our pieces than we did”.

How will people react to In the Garden of Sonic Delights, whose spectrum includes five additional installations scattered throughout the county?  Those who already enjoy sound will love the exhibition.  But these works are also for those who enjoy sound, but who are not aware that they enjoy sound – which is pretty much everyone.  Caramoor is that it is so rich with natural sound that the connection between art and nature is made without exposition.  The world of sound art could not ask for a better set piece.

In the Garden of Sonic Delights is open through November 2.  For complete information on all six venues, including hours and directions, please check the website below.

In the Garden of Sonic Delights