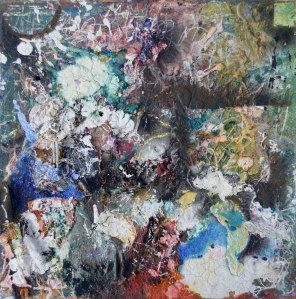 Over the course of the past year, we’ve been tracking the career of 0point1, formerly known as 0.1 and known to his friends as Bob Streckfuss.  He first appeared on our radar with “Softism”, from Feral Media’s 10.  Then came the exquisite extended single, “The Dance of Mechanical Birds”.  Now the debut album has finally arrived, and it lives up to expectations.

Clean dirt is a good description of these sounds, which are simultaneously gritty and smooth.  In our review of 10, we mentioned the Sigur Rós-isms of “Softism”, which is included here.  But that’s where the Icelandic comparisons end.  Streckfuss uses his voice as texture, specializing in onomatopoeia and buried lyrics.  But on this album, it’s all about the beeps and beats.

“Softism” begins with electronic drums and glitch, but ends in a thick, live sounding percussive array.  It’s clear that 0point1 is more concerned with variety than maintaining a steady beat.  “The Dance of Mechanical Birds” (not included here) speeds up and slows down; these 15 tracks are a microcosm of that opus.  Two to four minutes in length, each stands as a potential single.  Their concise nature allows for a great variety of experimentation, from the opening crunch of “Eggborn” (could that really be an amplified egg?) to the thick guitars and military march of “The Glass Trees”.

Rapid paces abound, beginning with the 152 b.p.m. attack of “Baby Dinosaurs.”  Go that fast, and your tracks don’t need to be long.  And as on “Dance”, these beats often slow within the track; “Radio Edit” sounds like a toy winding down until its battery is replaced.  Connections can be made to the raster-noton roster and industrial IDM, but the stuttered vocals – and clearly recognizable voice – help to establish a signature sound.

“Cartoon River” is the most representative cut on the album.  Intensely melodic, the piece rattles and bleats, rustles and attacks, combining snares and electronic drums in a concerted attack on the senses.  Then the breakdown arrives, beatless at first, with deep bass and a repeated vocal phrase.  A few eye blinks later, the acceleration arrives, only to recede in the closing seconds.  We were amazed that the artist packed so much into his 17-minute EP; we’re even more amazed that he can pack so much into a 3-minute track.  The next-best track is “Cryogen”, which boasts a metallic factory beat reminiscent of Depeche Mode’s “People Are People”.  A remix could put this track over the top, as the last ten seconds hint at future developments.

Distinctive electronica is difficult to find, but 0point1 demonstrates that there are still some good new ideas on the market.  Clean dirt is a wonderful debut album that should cement the artist’s reputation in the field.  (Richard Allen)