Birds of a Feather: Final Flight

We’ve greatly enjoyed Flaming Pines’ Birds of a Feather series, which has just reached its conclusion with Philippe Petit‘s The Kookaburra and Kate Carr‘s The Kakapo.  Over the past few years, this series of CD3″s has brought us some of the most original work in the field.  Before this series was introduced, most field recording fans were used to hearing birdsong without attribution.  Birdsong had become (and continues to be) a trope in ambient music as well, but one seldom encounters species identification.  Birders might know what they’re hearing, but the untrained ear just hears birds.  This lack of clarity was underlined in a scandal a few years back when CBS Sports was busted for adding fake birdsong to its coverage of the Masters Tournament.  In the aftermath, the network learned that there is no such thing as generic birdsong.

The final two installments of Birds of a Feather stay close to home with the laughing kookaburra (formerly known as the kingfisher, although they don’t eat fish) and the kakapo.  “Kookaburra” is a much better name for the former, as the word implies “cuckoo” and the “laugh” does posses a mirthful timbre.  Philippe Petit lends the bird more dignity than it is used to experiencing, surrounding its song with “violins, vinyl and voices”.  By placing the cries in such a context, Petit alters the interpretation. No longer just “funny”, the bird becomes intimidating, a sardonic commenter on the human condition.  And why shouldn’t the bird have the last laugh?  The kookaburra is in fact capable of making other sounds, and our projections are insufficient to capture the meaning of the cries.

By design, the recording falls into our Field Recording category, but it’s also an evocative work of modern composition.  A deep bass insinuates danger; the violins sweep and sway.  Great restraint is present in the presentation, which allows the kookaburra the chance to duet.  One can imagine the birds as part of the orchestra, or the orchestra as part of the birds; the integration is sublime.  This is how to add birdsong to human music. 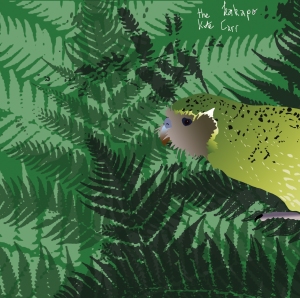 The Birds of a Feather series has is Kate Carr’s baby, so it’s only fitting that her installment concludes the series.  Her choice is the kakapo, the world’s heaviest (and most endangered) parrot.  The species has been lovingly chronicled in Douglas Adams & Mark Carwardine’s Last Chance to See, described as a bird that has not only forgotten how to fly, but has “forgotten that it had forgotten how to fly”.  The bird often attempts to escape predators by running up trees, jumping, then falling to the ground – thus earning the “endangered” tag (or at the very least, a Darwin Award).  The New Zealand bird does, however, have an alternate mode of transport: the self-constructed dirt bowl.  The bizarre nature of this species makes it easy to love, and Carr constructs for it a lovely nest of electronic sticks and silt-covered drones, along with some vinyl crackle for camouflage.  The bird itself – sounding sometimes like a theremin and other times like a bass clarinet – appears midway, as if commenting on Carr’s design.  According to “The Unnatural History of the Kakapo”, the kakapo sends out his mating cry “10,000 times a night, for three months”.  But it’s not enough.

By ending the series with an endangered species, Carr underlines the main point of the endeavor: the celebration of individual avian species.  Adams made this point through prose; Carr makes it through sound.  If these songs are lost forever, the sonic environment will grow blander.  If we’re content to hear generic birdsong, one day we’ll get our wish; the fewer species, the easier they are to identify.

Stay tuned for word on the Birds of a Feather Boxed Set, coming soon from Flaming Pines!