OK, it’s a bit delayed. I’m sorry, I will try to catch up the best I can over the next couple of columns. Enough of me, let’s proceed directly to the music…. 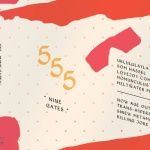 Thanks to the alphabetical nature of this column the last time 555 were reviewed here, they were buried at the end as I adopted the iTunes sorting approach. As I put together A-Z lists myself and stick the numbers at the front, I’m changing methodology. Plus, whereas 555 provided a pleasant ambient-techno inspired way to round off EO last year, this time around it’s all change; the arrangements are busier, the tempos higher and much of the ambient sound has been shaken off in return for a series of more vibrant tracks that can’t be relegated to background listening. “Lovejoy Comet”, for example, brings in 80s synth blasts, pitch bends and all manner of choral-preset sounds to create a miniature wall of sound piece that occasionally loses its way but eventually snaps back into focus. It’s essentially a microcosm of the whole album; a few of the tracks have a dubbier feel about them but this is a much more densely-layered record overall; even the beatless pieces couldn’t be considered ambient. It’s a bold, bright counterpoint to last year’s Solar Express – there’s a real study in contrasts between the two works and both are worth your time. 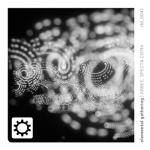 arbee is Mathieu Lamontagne from Quebec, spectra ciera is Massachusetts-based Devin Underwood. Both are prolific electronic artists with a taste for collaboration in their work, with a string of shared credits behind them, although this is their first outing together. They’ve never met but thanks to a decent broadband connection and a dose of inspiration they’ve made Elemental Gathering, a combination of new age-style whooshy synths and taut electro-inspired funk laced through with a good amount of dubby space. It’s an understated release and takes a few plays to get under the skin but when it works, it works beautifully – “Pomme Grenade” has just the right amount of whoosh over a muscular yet dialled back rhythm pattern, “En Pleine Ascension” is a slice of dub techno that gets surprisingly dense before stripping the elements away again for maximum impact. It doesn’t all flow – it might have been wise to have found “Turn Around” a home elsewhere – but overall it’s a high strike rate. Score another for the internet. 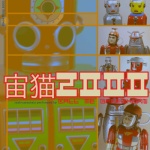 Now, this is an odd little record. Call Me Greenhorn ticks all the boxes with his named influences – King Tubby, Ennio Morricone and especially the Beastie Boys – but the over-riding sound of Space Kitty 2000 is the souped-up, slightly cheesy organ sound that’s the lead instrument on most of the opening sequence of tracks. Rather than sounding like Money Mark, it’s closer in spirit to those hits of the late 70s such as the RAH Band’s “The Crunch” and the disco-fied cover of the Doctor Who theme, which is frankly a rare occurrence nowadays. Indeed, “Go Go Greenhorn!” dusts down the Glitter Band beat that I’ve not heard since the days of the KLF. So the sound of Space Kitty 2000 is very much that of the tunes that might get called guilty pleasures, those tunes that get buried in the recesses of the mind but occasionally pop up to the surface. It is probably wise that the organ and beats get turned down in the second half of the album, because otherwise we might overdose on a full 30 minutes of this unashamedly joyful sound, but it’s fun while it lasts. 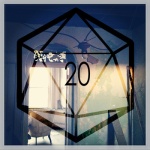 I hope Fat Kneel‘s a Community fan because that’s about the only justification I can find for burdening himself with such a name – although given the titles of the songs and the EP itself, maybe naming things isn’t his forte. Still, I’d rather a musician concentrated on the music and left the titles as an after thought rather than the other way round though. The Future Suk’t is a six-strong record of molasses-thick beats, sluggish basslines and atmosphere, with each track finding its own identity through a guest instrument – guitar on “Fair Wellington”, organ on “Ace Hunter” and so on and so forth. Once the theme is established, there’s not too much in the way of development, often a singular detour away from the main looping melody and then back to familiar territory. Lots of instrumental hip hop producers do this, but in these post-Dilla days, few are bold enough to run past the five minute mark as Fat Kneel does. But once you’re in a groove as solid as these, why be in such a hurry to leave? 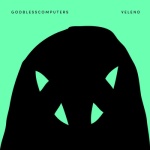 ‘God bless computers’ is probably a phrase that all of the artists featured on Electronic Observations could use, as the computer is not only the tool for making the music but also for designing the artwork, burning the discs and, via the internet, distributing the finished work and communicating about it. Of course it’s a different phrase when the hard drive goes or the broadband is disconnected but producer Lorenzo has opted for the positive approach, and it is one that shines through Veleno. There’s a concept behind this album – the sounds of nature co-existing alongside the man-made beats to form what is described as ‘a sonic tale about reciprocal contamination between nature and man’. This arrangements don’t offer a particularly unique approach, however, and you’d be hard pressed to identify the big idea behind the music – the titles don’t really offer much indication, either – but arguably the way to get listeners interested in the theme is to hook them with the music first and then let them uncover any messages later. As such, the light, catchy tracks on Veleno do much of the work for Lorenzo and will get repeat plays – and then, maybe, the tale will make sense. 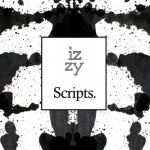 Playful piano loops, delicate hip hop beats, and witty sampled dialogue – the opening track on Izzy‘s debut EP doesn’t offer any major surprises but “Scripts” soons get lodged in the brain, as do many of the half-dozen tracks on offer here. The influence here is clearly west coast hip hop, plus the varied output of Luke Vibert, which has probably filtered through intermediate artists before getting to Izzy. Unlike Fat Kneel’s work, the tracks on Scripts do what they’ve got to do and then move on; there’s just enough time for the foot to tap and the head to nod before we’re on to the next track, and the movie samples are restricted to track one, with well-used chopped vocals utilised elsewhere. It’s not ground-breaking but it is a debut release – there’s plenty of promise here, and I would suspect the Izzy is capable of moving beyond the obvious influences into fresher sounds over the next few releases. 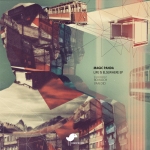 I’m not sure about the Panda bit, but ‘magic’ is suitably apt for this artist, who has produced an EP (three tracks; plus two remixes, not quite so effective) of suitably awe-inspiring electronica. The closest comparison I can come up with is the day-glo psychedelic rush of Nathan Fake’s Drowning in a Sea of Love, although with more emphasis on the four-to-the-floor beat. As such it’s a dizzying head-rush of a record, the sort of triumphantly epic music you play whilst watching the sun blaze into a field or the sea, before making your weary way home. To be honest, the power of Life Is Elsewhere caught me somewhat by surprise; I wasn’t expecting to feel quite so euphoric but it really connected. Magic Panda‘s had a few years to hone his craft with several releases already to his name but this is the first I’ve heard of him. I’ll be investigating further – this is powerful stuff. 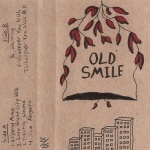 Skipping with some grace between languid, atmospheric instrumental studies (guitar, rhodes, field recordings) and poppier songs, with vocals and sometimes drums, Old Smile are an interesting proposition for the electronica fan. In fact, this is a record that wouldn’t have sounded out of place if it was released on Darla, a label that did bridge the gap between sweet indie pop and the softer end of drum ‘n’ bass. Without wishing to be too harsh on Old Smile’s singer, it’s the tracks with the vocals upfront that don’t quite work in this context; when the voice is buried on the effects-heavy “Tightly Wound”, it fits with the other tracks much more sympathetically. It’s the quartet of instrumentals that catch the imagination most, however, they sound like the spiritual heirs of David Tyack’s Dakota Oak, producing brief but pleasant bucolic tracks. Whatever direction they choose to take, or whether they continue to embrace both styles, they will have to work on their songcraft; Old Smile sounds great but arguably needs better tunes. 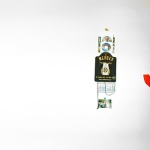 Gentle, floaty techno is the order of the day on this EP from New York-based producer Peter Segerstrom. Since discovering the Atomnation label last year I’ve been increasingly impressed by both their approach and output and this is another strong release from their fairly compact stable. This is not a straightforward techno release though – even when locked into a steady beat, Segerstrom goes for the occasional jazz-fusion style analogue synth solo rather than settling for steadily introducing fresh loops. It’s an approach that  works, and it has certainly been a ‘go-to’ style for numerous techno producers in the past, although it seems to have dropped away recently. Perhaps now is the time for a re-introduction of the techno/fusion alliance. Speaking of dropping away, Segerstrom jettisons the beat entirely on “Light Switch”, and goes for an impressionistic piano / vocal arrangement. It’s a bold move in the context, and I’m not convinced that it succeeds – but it does give Rental something fresh amidst the beats and emphasises this EP’s home listening qualities. 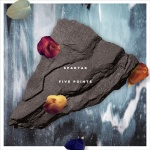 This is more vocal-centric than Old Smile above, but equally it is more distinctively electronic, too; and I must admit from my previous experience of Spartak that description is not one I was expecting to write as this is quite a departure from the impressionistic improvised sound from a few years back. On Five Points the Australian trio adopt a hard-edged, slightly brittle mix of beats and fluid bass, topped with shimmering guitar work; it depends on each track as to what element is the most prominent, and the band are pretty versatile given what are I guess self-imposed limitations to their sound. The chugging opener “On Conditions” is probably the strongest track here, with a shifting industrial-meets-techno arrangement submerging the vocals, but the overall impression is positive. These are thoughtfully arranged, well produced compositions and this EP is a bold stylistic step – Spartak are showing real focus here and it bodes well for the future.