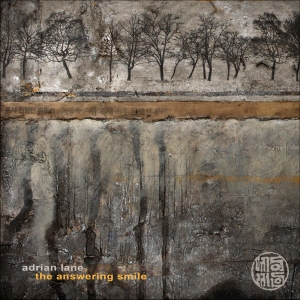 Adrian Lane‘s second album for Poland’s Preserved Sound inspires a sense of admiration.  The music is as thick as that of a small orchestra, yet Lane plays all of the instruments himself: bowed psaltery, mandolin, zither, violin, acoustic guitar and more.  Guess who painted the cover?

As one might expect from the above array, the album will appear to fans of The Cloisters and Richard Skelton.  A madrigal presence is apparent throughout, as are a stately elegance and a fluid reverence.  It’s easy to be too reverent, but Lane sidesteps the potential problem with contemporary arrangements.  “Isotherm” may include ancient tones, but winks at modern drones.

The title inspires thoughts of welcome flirtation: a warm response to a soft approach.  This overriding theme is reflected in the album’s romantic feeling.  With track titles such as “The Unopened Letter” and “But Lingered a Moment”, Lane reignites a tradition of courtship that seems all but absent in the current age.  Writing letters, allowing suggestion to replace display: these are the marks of a patient love.  And The Answering Smile is a patient album, content to make a solid impression, then retreat to the safety of the carriage.  As the longest track (albeit only five minutes), “But Lingered a Moment” is also the most immediate, allowing the strings a direct route to the center of the song while walking the percussion on a short leash.

Length is an important consideration in these tracks, six of which fall into the two-minute range.  These shorter tracks represent the glance on the street, the jolt of synergy, the answering smile.  By allowing the tracks to make small impressions, Lane serves his subject well.  Yet in the end, this is less a work of component parts than it is of a whole.  On the surface, one might ask for more development in the shorter pieces, but after digesting the whole, one realizes that the fulfillment of certain tracks lies in other tracks.  The artist encourages the pieces to flow into each other like wild emotions, knowing no boundaries, holding onto every scrap of encouragement.  (Richard Allen)