Another excellent release from the ever-reliable Infinite Greyscale, Body Sound continues the label’s tradition of offering creative music on 10″ colored vinyl.  A fellow reviewer called the release “slightly baffling,” but it’s not; it’s beautiful.  The unique nature of the recording deserves the special treatment that it receives here.  The cover image is particularly appealing: graphic art in the Charles Burns vein that offers an indication of what to expect inside.

The hand, the foot, the floor … the movements of choreographer Cuauhtemoc Peranda are amplified and rearranged by Herndon into an alluring eight-minute piece.  One begins to think of modern dance in general, realizing that the typical observer is caught up in sight rather than sound.  By removing visuals, Peranda and Herndon demonstrate the power of the aural.  This is ballet for the ears, with heavier feet. 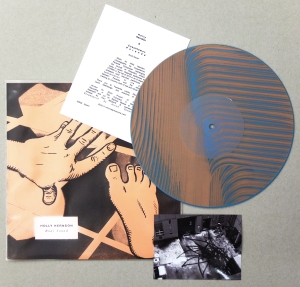 While taps are also part of the equation, this isn’t tap dancing; and while exhalations are included, this isn’t human beat box.  Body Sound is bare feet, bare hands, bare breath, the performer baring it all.  Herndon’s arrangement allows the performance to imitate the skeleton of a song, with bass drum and synth noises intimated in the dance.  An excellent use of stereo effects makes the modified performance seem three-dimensional, as if the listener, with closed eyes, is following the choreographer across the floor.  The mastering is so crisp that one is swiftly reeled into the experience, invited to respond with whirls of one’s own.  Body Sound is a true original, a pure vision brought to life.  (Richard Allen)