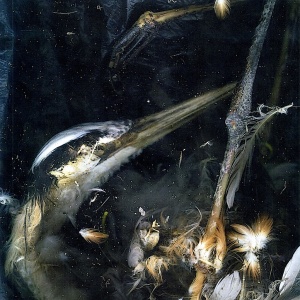 Beautiful or ugly?  This is the primary question posed by Disemballerina, a band whose music, imagery and history converge at this juncture.  The look and feel of the album hearken back to the classic years of 4AD (His Name Is Alive, This Mortal Coil), while the message is timeless: you need not feel so alone.

The album begins with a death rattle.  Morbid or tender?  The typical reaction (although perhaps not for readers of this site) might be the former.  “I don’t want to listen to that”, many would say, preferring to wait until dark and to watch serial killers on TV.  But these are the last breaths of a dying friend – an actual dying friend – and “Sundowning” is a tearful, tasteful elegy not only to this friend, but to all of the elderly and often forgotten.

That’s a pretty cover.  Yes, it is.  It’s a dead heron photocopied at Kinko’s.  Still like it?  There are many more like it – just follow the link below.  It’s a hobby of Myles Donovan (viola) ~ to look for dead birds and to use them as art.  Disgusting or reverent?  Again, many would say the former, before shrinking into their digital cocoons and downloading porn.  But the artist feels something for these birds – a deep empathy rooted in childhood feelings of neglect and judgment.  Should one leave avian corpses on the side of the road?  Or might one offer them some final dignity, providing their short lives with a manner of transcendence?

I heard that gay boy killed himself.  What a shame.  If only he had come to know Christ.  A rash of suicides in the LBGT community inspired a rash of abusive comments from the media and private citizens.  What is beautiful?  What is ugly?  What does God really hate?  Is there a greater sin than the utter dismissal of another human being?  “Black Angel Trumpet” addresses this question with stringed tenderness, offering arms to embrace the suicidal soul.  Other tracks celebrate the world of fantasy, from thoughts of the Carpathian mountains to L. Frank Baum.  If only I could fly away.

Heavy metal hurts my ears.  Okay, then you might like this.  It isn’t metal, although the members of Disemballerina all come from the metal community.  They often play to set the mood before a metal onslaught.  Okay, but this sounds really depressing.  Yes, it is.  Is that bad?  Should we avoid all talk of anything sad?  “I don’t want to hear depressing music”, some might say, before drowning themselves in news stories of murder, rape and war and not doing anything about it.  If one’s heart is broken by art, might one be motivated to be kinder, gentler, more peaceful?

A shapely figure or a kind soul?  A dead body or a dead heart?  What is beautiful?  What is ugly?  The Undertaker invites us to ruminate on these concepts, and to reevaluate our perspectives.  (Richard Allen)