Heinali ~ Music to Sleep Under Snow 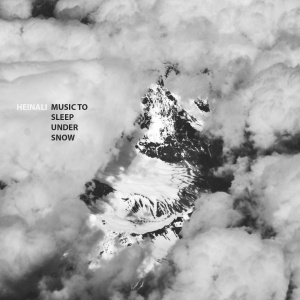 This year’s winter-themed releases have been arriving before the autumn-themed releases, a strange turn of events for the Northern Hemisphere.  But Heinali‘s native Ukraine has been experiencing a political winter, which lends his latest release a touch of unintentional metaphor.  To many, a coating of snow means beauty, quiet, peace.  As the nation yearns for such things, Music to Sleep Under Snow provides a reminder of peaceful days past, and peaceful days to come.

The last time we reviewed Heinali (Oleg Shpudeiko), we covered his album Air.  The new work, which collects and re-works pieces found on various Futuresequence compilations, is water-based.  A separate series based on “post-Soviet context” is inspired by land (granite, anthracite).  As for fire, there’s certainly enough of it around as of late, but we suspect the composer will eventually complete the set.

Despite the composer’s insistence that the current tracks are connected via the states of water (solid, liquid, gas), Music to Sleep Under Snow gives preference to the former, with snow appearing in two of the titles and clouds in the third.  Snow has been a topic for Heinali before; 2011’s 67 Breaths closed with “Love On the Snow”, while “Soft Like Snow” was released as a stand-alone single in 2013.  The former is more subdued than anything in the current set, while the latter is more overt: a composed piano track that would have made a nice coda to Music to Sleep Under Snow had it been included.

The best track here – and all three are worth purchasing – is “A Handful of Snowflakes”, which to this reviewer was the standout cut on the 41-track Sequence3 compilation.  It’s easy for a track to get lost in such a crowd, so it’s wonderful to see it given a second chance.  Upon its release, I wrote that it was reminiscent of Wixel’s “Cloud Fields” without being derivative, and the comparison is still apt.  Wind chimes, static and glockenspiel form an impression of swirling snow and sleigh bells.  It’s absolutely stunning, the sort of track one wishes every soldier could hear ~ and perhaps it is heard in dreams, like a vision of a united, enchanted land.  The title track, reworked from an earlier version on Sequence4, is more like gentle flurries, with sharp piano notes suggesting a startled deer.  The track is now three minutes longer, with a more composed ending: both good choices.  And “Clouds” (ironically, the title of the Wixel EP) makes a fine middle piece, with light drones rustling around the edges like electrical discharges.  Together, they make a fine set: there is still beauty in the land.  (Richard Allen)