Louis Sarno ~ Song from the Forest 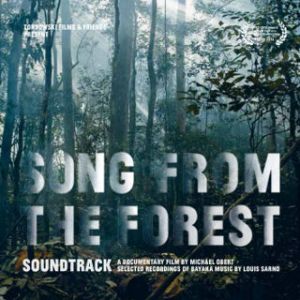 Listening to Song from the Forest, many older readers will think of the famous French duo Deep Forest.  The duo helped increase interest in world music in the early nineties, but they also did the genre a slight disservice, creating an unfair association between native music and electronic beats.  Song from the Forest – the soundtrack to the movie of the same name – is real world music, the sound of the Bayaka Pygmies as captured by Louis Sarno (with film direction by Michael Obert).

Sarno is the real deal.  25 years ago (the same time as Deep Forest became popular) – he heard a song on the radio and traced its origin to the Congo.  Could “Sweet Lullaby” be the song he heard? If so, perhaps we should give the French duo more credit, because this recording is an inspiration, culled from over 1000 hours of tapes.  Sarno now lives with the Bayaka, has a Pygmy son, and serves as an intermediary between the tribe and the outer world.

This is what it sounds like to be deep in the forest among the crickets and birds and hidden predators: beautiful and frightening, a small piece of the surpassing unknown.  The song from the forest existed before it became Song from the Forest; nature sings its songs, and the Bayaka respond with their own.

The individual voices are intriguing, but the group dynamics inspire awe.  These musicians interact and improvise, often using nearby objects (sticks, rocks) to enhance handmade drums.  Polyphonic chanting and interlocking melodies abound.  These songs are not performances, but expressions of tribal unity; the songs are who they are.

Sonic ephemera are interspersed: a walk through the forest, along with nearby monkeys (or Bayaka imitating monkeys; it’s not clear); a tranquil evening; Sarno’s description of the wonderful forest food.  The more one listens, the more one appreciates the care that has gone into the selection of sounds; for those unable to see the movie, the soundtrack is the next best thing, bringing the forest to life.  Just don’t call it world music; it’s Bayaka music, and it’s earned our respect.  (Richard Allen)