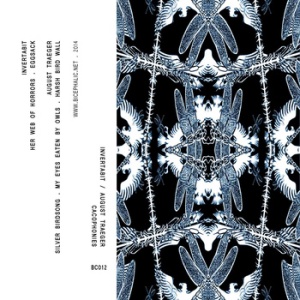 Cacophonies is music composed and conducted by creepy crawlies. Dark ambient in presentation and in sound, the music is the sound of the wild. These are field recordings sourced from insects and birds; music from the backyard, music from the darkest woodland.

Autumn is spider season, and if you’ve been unlucky enough to spot a few in your home (I have), you’ll know that paralyzing sensation when one creeps into your room. Allow the terrifying five minute stand-off to commence, where all you can do is just stare at it and hope that it doesn’t come your way. Just please leave me alone, you think. It’s an invasion of fear and a breach of security in a place that should feel like home sweet home. Cacophonies brings the insects closer to home and after the opening encounter you’ll be wanting the shrieking beast to leave you alone. It’s not in a sparing mood, though. The music has been foraging for long enough, and now it has come to claim its victim.

“Her Web of Horrors + Eggsack” may not be the best introduction if you’re arachnophobic. Saying that, many different insects make up the track. The chirp of the insects casually washing the day away suddenly gives way to an onslaught of nightly noise. A low, thunderous drone scuttles around in the undergrowth, but its position remains unclear. The spiders weave their metallic webs of cold design and scurry back and forth on hairy, sensitive legs. You turn your head for a second and the creature has gone, disappeared completely, leaving you to your relentless imagination (which is just as scary). The droning bass is an earthquake that threatens to destabilize the track, deeply muffled as if sourced from directly inside this egg, its infancy ready to emerge.

Invertabit (Nick Fortier) and August Traeger share their unsettling music, and at a running time of thirty minutes they know when to call it quits. Cacophonies takes another turn with August Traeger’s two tracks. “Silver Birdsong + My Eyes Eaten By Owls” starts off serenely with a placid sound that we’ve all heard before on numerous ambient albums, but there’s a reason as to its prolific nature. This is interrupted – no, shattered – by an intermittent bass that starts to breathe around the music.

In August I actually saw a wasp try to free its trapped friend from the clutches of a spider, only for the spider to fend it off with its outstretched legs. In some ways, Cacophonies is a battle in which different sounds and insects vie for control. “Harsh Bird Wall” is a seven minute journey into insect insanity with its barrage of jumbled noise. The creatures are lost in the flurry of a thousand wings, and still the drone hums and buzzes, closing in until nothing is left but the jet black, uncaring eyes and the open fangs of the tarantula. (James Catchpole)