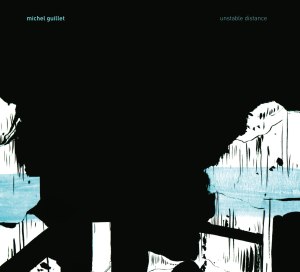 Parisian Michel Guillet‘s impressive resume dates back to the turn of the century: film work, dance scores, concerts and collaborations.  Unstable Distance is his fourth album.  The stated goal: “to create continuity with discontinuity.”  While the artist succeeds in his goal, the greater success is in the sheer massiveness of his sound. Guillet stuffs so many sources into his music that one fears it will become one long note; and yet, it never does.  Each sound remains distinct, even when welded to sonic hordes.

The two 33-minute tracks are each dense excursions, as notable for their silences as they are for their smashings.  The album begins with harsh metallic tones, offset by such silences: a portent of things to come.  As the other sounds arrive, one struggles to identify them: kettles, large metallic sheets, rubber heels on wooden floors.  Yet only five minutes into the piece, the clash of the titans ends, giving way to percussion: a bell tone, followed by pipes and lids.  It’s all speculation, of course; imagine the Blue Man group trapped in a factory, needing rescue and knowing that if they only could be loud enough for long enough, help might come.  This is Guillet’s primary appeal: not the contrast between sudden and sustained tones, but the claustrophobic cacophony he creates.

Over the years, I’ve come to love these timbres: alarms, faulty circuits, stuttering computers.  But it took a long time to get here, and these sounds are not for all people.  Call this the advanced course; when all the smooth, lovely, predictable sounds grow dull, the harsh and broken possess a different appeal.  The album is most recommended to those who appreciate a variety of noises, regardless of harshness: sputtering fuses, crashing cymbals, engine failures, stuck discs.  Unstable Distance is the sound of everything falling apart at once; and yet, because the weldings continue, it’s also the sound of constant entropy.  The best example can be found in the opening segment of “Unstable Distance 2”, which features the album’s longest continuous pattern.  When this pattern eventually falls into the compactor, it leaves behind a sonic legacy: the only constant is change.  If instability is stable, can it still be called instability?  And if so, might this music come across as soothing?  (Richard Allen)