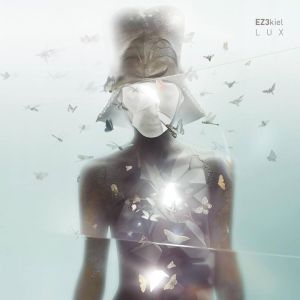 From the cover, one is led to expect a gothic/industrial album.  From the lead single, “Anonymous”, one is led to expect a sparse, vocal, electronic album.  And yet, neither is the case.  The French band’s tenth album in 23 years continues to cross boundaries with aplomb.  EZ3kiel‘s music is accessible enough to inspire hits (“Anonymous” being the prime candidate) but also mysterious enough to intrigue fans who arrive on different trains.

Take for example the second public track, “Dead in Valhalla”.  One of eight instrumentals (set against two vocal tracks), the beat-heavy piece also relies heavily – and happily – on the violin of guest performer Pierre Bloch.  Half potential dance floor piece, half modern composition, it defies attempts to define it.  By the end, it’s part post-rock, part The Cure, but by that time listeners have simply given in to its charms.  The longest track on the album, “Dead in Valhalla” is also its best, serving as an overture to the band’s extensive discography.  If one enjoys any part of the piece, or indeed the piece as a whole, one is invited to discover more, as the quartet has presented many faces throughout the years, from orchestral (Naphtaline Orchestra) to industrial (Battlefield).  See, we weren’t that far off.

The one constant of the band’s music is its drama.  By drawing on elements of circus, cabaret and film, EZ3kiel produces moments of suspense (the whispered glockenspiel hush sandwiched between guitars on “Born in Valhalla”) and adventure (the metallic hues of the stomping title track).  Restraint is in short supply here; the band’s only liability is occasional excess.  And yet, there’s a fine market for such drama; Amanda Palmer comes to mind, as do the New York Philharmonic renditions of “The Lord of the Rings”.  Lux should translate well to the live stage, but even at home one may indulge in excess, as multiple versions of the album are available, including triple LP, CD/bonus disc and optional postcard set.  EZ3kiel has never done anything halfway, and they’re not about to begin now. (Richard Allen)