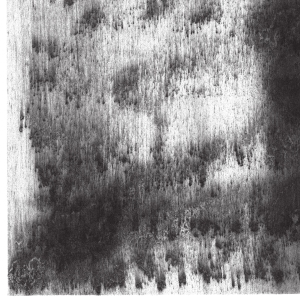 Lawrence English’s follow-up to Shadow of the Monolith continues his exploration of Antarctic sounds, but is a much more visceral and immediate work than its predecessor.  On this LP, English presents two side-long recordings of winter fury.  Given such conditions, most reasonable people would stay inside; not so English, who soldiered into the surging white.

As I write, we’ve just survived another blizzard: white-out conditions, 60 mph/95 kph winds, temperatures of 0F/-18C and wind chills of -30F/-34C.  And yet, this relatively brief blast is nothing compared to the circumstances faced by English on two frigid expeditions.  Stuck in Patagonia during a wind storm, English “recorded abandoned buildings, lone trees bent over in fields of tundra-like grasses, quivering road signs, wailing fences and other objects brought into relief with the wind” while the scientists waited inside, likely wondering at the crazy man with the field recording equipment.  In Antarctica, English ventured out twice in -40F/C temperatures to make recordings in blizzards.  Seldom do we encounter sound artists risking their lives in this way; the violence of these recordings underlines the danger.

Both recordings are excellent, filled with multiple nuances and a host of more obvious sounds, most prominently the wind-spanked metal of “Patagonia”.  If wind can do this to metal, what can it do to the human body?  The frenzy of these seemingly unending forces makes one think of the films in which people are trapped in a building when the generator goes out, and must send a member of their crew into the elements.  In such films, there’s usually a murderer outside as well, who clocks them on the head with a wrench.  Viento doesn’t need such drama to make its point; nature is terrifying enough.

“Antarctica” is more snow and less metal.  Although the creaks are still present, the track is dominated by the sound of weather.  The piece even contains a musical element: a type of drone created by wind shear.  As such, it comes across as more of a soundscape, despite the fact that it is presented without adulteration.  At times a bell tone sounds, perhaps a frozen chain against a flagpole or a stray wind chime.  The piece will appeal to drone fans as well as field recording aficionados, underscoring the link between music and nature, a fine line that English knows well.  Viento is the natural culmination of the artist’s lifelong fascination with winter sounds, which first surfaced in 2007 with For Varying Degrees of Winter.  Now English has the raw material to match the music.  (Richard Allen)