Few recordings are truly one of a kind.  We’d place Pawn’s Kitchen in this category, as well as One and Seven Eighth’s Modern Camping Songs.  Now joining this elite group is the latest EP from R. Weis, who over the past three decades has lost none of his experimental streak and has shed none of his joy.

The first of the aforementioned recordings uses kitchen implements as percussion, while the second samples the sounds of campers and sleeping bags.  R. Weis manipulates the sounds of an African grey parrot named Congo along with the sound of a dropped book (about the Congo, of course).  While millions of musicians have dreamt of one day composing a parrot and paperback EP, Weis is the only one to ever go through with it.  Why have so many others failed before him?  Perhaps it is the daunting nature of such a project.  First, one needs access to a parrot.  Next, one must make difficult decisions: hardback or paperback?  Floor or table?  Will the dropped paperback upset the parrot?  Should the two be recorded in different rooms?  What if the parrot requests a rider?

If anyone were to tackle such a project, it was going to be Weis.  After all, he’d already laid the groundwork with the classic Dog Choir in 2003. (What howls!  What harmonies!)  It’s a wonder he waited so long to return to this sort of music, although 2011’s “Casserole and Singing Bowl” and “Plastic Foil Rubber” came close.  With the percussive Parrot & Paperback, Weis matches the timbre of artists including Modified Toy Orchestra, Weerthof and Twink, but with a major difference: a parrot is not a toy.  (Patrick McGoohan fans may recall his famous utterance, “I am not a plaything, I am a free bird!”  Or something to that extent.) 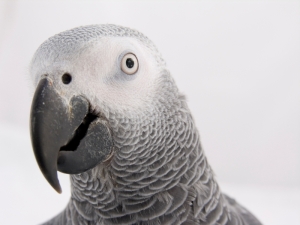 And here’s the great thing: Parrot & Paperback is actually worth the fish.  Its closest relative may be Modified Toy Orchestra’s “This Is the Monkey”, but again, that was a Speak N Spell.  Weis brings the hard beats – yes, one can dance to this, and by God we want remixes – and Congo brings the speech.  One imagines his head bobbing to the playback.  This could go viral: a parrot dancing to his own sampled voice.  “What are you doin’?” he asks during “Pt. I”.  What indeed.  What a strange owner.  As long as the crackers keep coming, it’s all good.

At 108 bpm, “Pt. II” might lend itself well to rap, but instead, here’s Congo once again ruminating on the nature of existence.  This time, the whistle grows even more apparent.  “I’m smart”, says Congo.  Humble he is not.  This is probably due to the fact that there are no other parrot and paperback EPs, and he knows it.

Are we selling the paperback short?  Perhaps, but paperbacks have no feelings.  Suffice it to say that the beats are consistent, insistent, and fun.  Back in the 80s, Paul Hardcastle had to use sampled movie dialogue to get his point across, and he needed synthesizers to make beats.  Think of how much money he could have saved with a simple parrot and paperback!  But we digress.

How many parrot and paperback EPs do you need?  One.  And now, finally, there is one.  It’s only six bucks (two less than a 16 oz. box of Nabisco Premium Salted Crackers on Amazon), and we suggest that you buy a copy today.  Otherwise, years from now, you’ll be ruing the missed opportunity and having the darndest time recalling the name of that “parrot and paperback” thing you read about once.  What was it called again?  Act now and spare yourself the future pain.  (Richard Allen)