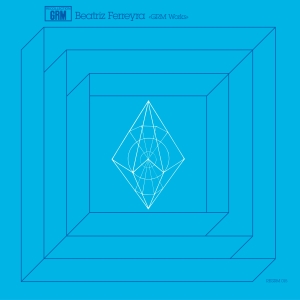 GRM Works, by France-based Argentinian composer Beatriz Ferreyra, is perhaps a key new entry in the wonderful Recollection GRM series by Editions Mego, which represents an important documentary move towards producing a new set of archival materials of one of the birthplaces of electronic music, the Groupe de Recherches Musicales as founded in 1958 by Pierre Schaeffer. The history traced by the collection is one of differing voices for the context under which we usually place the GRM in the development of electroacoustics, in the sense that it becomes a beacon for a modernism that is not fully dedicated to the machine. Its serialist, more formally avant-garde counterpart, best exemplified by composers like Milton Babbitt, Karlheinz Stockhausen and later Pierre Boulez, set out for the conquest of sound in a scientific approach intimately compatible with that geared towards the dominance of nature, a mechanical environment to be transcended by the sheer will of our technological extensions of the mind and body. Ferreyra’s work, informed by Schaeffer’s, is an example of another approach to the same exploration of the sound-world: it was also essentially scientific, but it endeavored to raise more questions than answers, to liberate the sounds in order not to destroy music but to completely transform it.

Its relation to nature is not as radically aggressive, performing its modernism in a way that constantly betrays its humanistic core, a systemic inquiry that takes the unknown as subject of study instead of as final end-point of history, carefully opening the musical art form instead of nuking it. It is significant that Ferreyra links a couple of the pieces contained in GRM Works to alchemy and the Qabalah, particularly because they involve methods of attaining knowledge that see nature not as construct but as cipher, as a relationship of meanings forever in escape, meanings that nonetheless provide procedures for understanding the unknown without necessarily subjecting it. That every cipher is a code might not be a coincidence, inasmuch the composer gets to play with both tape and software, a subtle suggestion that analog and digital might not be so different from each other after all – what matters is the perception of the code, the revelation of the final stage of the procedure, the magical aspects of a modernism that does not tend to equate the ‘rational’ with the ‘instrumental’. These sounds merge and flow into each other, masking the artifice behind them with a deep non-concern for musical rules, providing an ever-shifting ground for the kind of perception that we usually reserve for our environment. Unlike with other sorts of electroacoustic experiments, there is no need here for directions, for visual lines and vertices, for something to negate (an instrument punished, an ugly machine in the company of a beautiful violin); everything before our ears attempts to reproduce the inner life of the natural sound-world, a mélange of micro and macro aural pieces from which can only arise imaginative meanings, creative ways of making sense of this complex code.

As with the aforementioned esoteric approaches, intent is everything with this strain of electronic music, because there is no meaning without the assumption that someone is behind it. In a 2001 interview, Ferreyra said that “electroacoustic music needs to be performed; it must be in the space because it has space in it.” She meant not only that a computer program cannot replace a musician (after all, they cannot think… yet), but also that every sound used here is taken from a context, and that, unlike the ones from the other main avant-garde of electronics, these sounds are not individually new, but re-imagined. She added that sounds in these performances should move “as [they move] in life”, making wholes out of places, grafting the meanings of these re-imagined sounds everywhere, sometimes at once, sometimes over time, and always at the disposal of the audience and performers as sharing in the quality of interpreters. However, while Ferreyra’s philosophy seems to have remained in more or less the same course along the last forty years, the pieces in GRM Works do have a story to tell: the album’s order puts a 1960s track followed by a much more recent one (as recent as 2011) produced with the same kind of material, and while the similarities are many due to the basic methodology, the differences are easy to spot. First, the track length of the older pieces runs to about 7 minutes, while the newer ones go for about 18. This is, conceivably, due to technological reasons, which also very clearly change the sounds themselves, making the recent pieces much crisper. Second, there is a sense that the 1960s tracks are much more exploratory, hanging together in a more disparate, fragmented manner than the newer ones, which feel like totalities, like ambiences that sway and fall organically where the others shift and break. In that regard, not only is this collection a newly produced historical document about the GRM, but also a take on the composer’s own development, fascinating on its own, and not solely for the already interesting possibility of a gendered revision of the history of electronic music.

As the Recollection builds further paths into said history, it’s up to us to take on the challenge that the editors have set out for us: to stop and listen anew, to appreciate, in the case of Ferreyra, that not all avant-gardes were the same. (David Murrieta)