Mark Vernon ~ Things That Were Missed In The Clamour For Calm 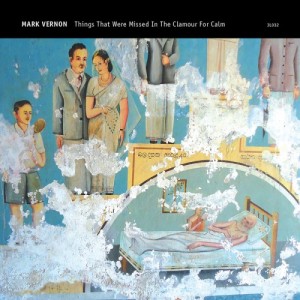 “Whatever is not full makes noise.  Whatever is full is quiet.”  Buddha’s quote lies at the heart of Mark Vernon‘s Sri Lankan sound collage, an exercise in juxtaposition.  Vernon’s CD introduction describes a mechanism in Colombo that instigates noise – drums, bells and cymbals – to block out the “unwanted noise” of tuk tuk horns and street vendors.  This mechanism, writes Vernon, “creates a meditative space … amidst the hubbub of quotidian reality.”

Things That Were Missed In The Clamour For Calm not only reflects the ideas of this introduction, but invites dialogue on the subject.  This music is now the focus of a sound installation, but the home listener can engage in a similar way.  Over the course of an hour, one will encounter all manner of Sri Lankan sound, from the aforementioned horns and vendors to Beethoven, bathing and birds.  Some segments are “pure” ~ all human or all natural ~ but each overlaps with others.  Just as one is getting into the aforementioned meditative state, someone starts playing tin can drums, and the concentration is lost.  Or is it?  Another listener may be bored to by the sounds of nature and drones, and suddenly engaged by the entrance of the human element.  If we were able to choose our sonic environment, would we make the right decisions?  Or would we leave something out in the clamour for calm?

Control seems to be the mitigating factor.  When one is able to control one’s sonic environment, one feels more at home.  Contrast, for example, the sound of one’s personal listening device with the music played in markets and malls; or a conversation with a friend in a restaurant set against the screaming of an unchecked child.  Vernon understands the difference, but he also understands that many people disagree on the definition of a “pleasurable” sound.  Some people prefer crickets to drums, others the opposite.  The story behind the story is that Vernon chose every sound on this disc, and decided where it would be placed: a dog, a plane, an exhaust pipe, a local band.  In so doing, he tames the untamed, defining every sound as desirable.

My favorite sound here is that of a person at a typewriter, hard at work against the backdrop of a busy street.  There’s no telling if this is a real person writing a real novel, or if it is simply Vernon at the keys, striking miscellaneous letters.  The mind creates images of its own, and this particular juxtaposition paints a literary picture of Sri Lanka and its peculiar charms.  It’s no accident that this segment is immediately followed by loud drumming, announcements, and a protest or parade, an injection of local flavor that could not have come from anywhere else.  Here, if only briefly, the impression shifts from that of a dreamworld to the specific.  A snatch of English momentarily breaks the spell, proving Vernon’s point; for a few seconds, the listener no longer prefers the familiar.

The reclining figure in the lower left of the cover painting is a subtle reminder of Vernon’s last album, Sounds of the Modern Hospital. This was a completely different type of recording, more sound effect than sound collage, but its variety of timbres, as well as its attempt to organize sonic fragments into related clusters, laid the groundwork for the current release.  Prior to this came Static Cinema, a work of musique concrète that integrated the use of household objects.  There’s no telling where Vernon will head next, but he’s just completed three unique works in a row.  This is the noise we want.  (Richard Allen)

Tags: 3leaves, Mark Vernon, Richard Allen, Things That Were Missed In The Clamour For Calm