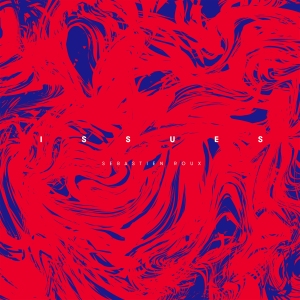 Here’s a concept we’ve never encountered before, and are unlikely to see again, due to its very complexity: six issues of a magazine (contemporary art review VOLUME) used as a score.  It’s important to emphasize that the features themselves are referenced and transmuted, words into sound. Issues is not a simple reflection of its inspiration, nor a soundtrack in the common sense of the word.  However, the phrase sound tracks might be accurate in describing this fascinating endeavor.

Roux has done this sort of thing before, reflecting the instructions for an art installation and a short story by Flaubert, carving an extremely small niche.  And yet, when one considers the “normal” inspirations for music, Roux’s experiment makes sense.  While other artists attempt to translate mood or experience into music, and field recording artists in particular seek to translate large concepts into finite recordings, Roux casts his net into literate fields.  As Christophe Gallois so succinctly writes, “At the start of each project lies the intuition that such and such a text, or work of art, potentially contains music. Like a water dowser, Sébastien Roux wanders around with his composer’s rod: ‘There’s music underneath,’ he seems to say every time he takes an interest in a new object.”

The perfect way to listen to this project is clearly in conjunction with the original texts, which were unavailable to this reviewer (but will also be unavailable to most listeners, so this review will reflect the experience most will encounter).  For those who saved their copies of VOLUME, this is an essential purchase.  I can only imagine what this very review would sound like if used as a score; I suspect the results would be humbling (realizing that someone had taken the time to translate it), intimidating (giving up the “right” to emphasize the parts I felt were worth emphasis) and ultimately flattering (art inspiring art).  While some choices are obvious (like the phrase, “ma musique” extracted from Issue 4, looped, repeated, and surrounded by curious wildlife noises), others are less so.  In this review, for example, I would highlight the phrase, sound tracks, but what if Roux chose instead to focus on the word “intimidating”?  Is the heart of the written word found in the author’s intentions, or the reader’s interpretations?  Once a work of art – any work of art – is out there, the right of definition shifts to the perceiver.  One may say, “I didn’t mean to say that!”, but one did, and others picked up on it.  Right or wrong, it’s there.

Roux may use the texts as raw material, but he also seeks to reflect the meaning behind the texts.  The first four issues in particular incorporate swaths of silence, highlighting the contrast between silence and sound, but also isolating particular moments, in the same way as one might linger over an image or phrase.  The final two issues are denser, operating as thick sound collage, incorporating some of the sounds used earlier in the set: horses, church bells, orchestra and opera samples.  As one listens, one zeroes in on particular sounds: the alarm clock of the opening track; transit announcements, flowing water and a film reel in “Issue 2”, the seabirds, waves and rain in “Issue 5”.  The LP invites listeners to listen closely, which is what we’re all about; but also to read and look closely, and allusively.

When Anne-Lou Vicente and Raphaël Brunel launched VOLUME in 2010, the pair “relied solely on the texts and images published to diffuse an otherwise inaudible ‘ocean of sounds.’”  Thanks to Sébastien Roux, we can now hear the ocean.  (Richard Allen)

Tags: Issues, Richard Allen, Sebastien Roux, Volume, What You See Is What You Hear