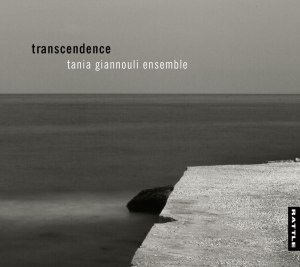 Tania Giannouli is a jazz pianist, and her previous album, Forest Stories (with Paulo Chagas) would have fallen into our Jazz category.  So why have we placed her new collection in Modern Composition?  The answer is simple.  With the expansion to an ensemble, Giannouli has also modified her sound.  As much influenced by classical as by jazz, Transcendence is a true genre-jumper.  While most tracks lean one way or the other, the overall impression is that of a tiny orchestra.

The pieces of Transcendence are also classifiable by mood.  Some are obvious, and visual aids help.  The languid, melancholic “The Sea” seems designed for a relaxing evening, lapping waves and a bottle of wine.  The video is fairly simple, hiding the fact that the piano lines are quite complex.  One of Giannouli’s strengths is the impression of improvisation even in the midst of composed work.  Guido de Flaviis’ saxophone is the smooth, jazzy influence, while Alexandros Botinis’ cello provides a dark classical undertone.  A better video is the noir-ish “Obsession”; the black-and-white cinematography brings out the longing in the music.  In this piece, Snares play a major role in establishing the dramatic forward march of an obsessed heart.  The most effective (and slightly chilling) moment of the video arrives at 4:30, when one of the actresses stops looking at the moon/skylight and gazes directly into the camera; but the compositional moment that sets up the scene arrives a minute earlier, when the snares relent, creating a vacuum.  The prelude to “Obsession” can be found as far back as the opening track, “The Weeping Willow”.  This sparse piece bears an ominous sheen, as if sadness is about to turn into something dark and undefinable.

The album’s catchiest tracks lie in between.  “Sun Dance” and “Faster Than Wear” come across like a Mediterranean family gathering, filled with food and festivity.  One imagines shirt sleeves rolled up and dresses twirling as men and women dance on terra-cotta terraces.  The first piece is Botinis’ showcase, while the second is a playground for Giannouli.  It’s wonderful to encounter a performer who can draw from so many moods in order to create a unified set.  One wonders if transcendence may refer to a state beyond emotion, one of inner calm, in which all emotion has been spent, and replaced by peace.  By contrasting formal, stately classicism (the opening bars of “From Foreign Lands” and the echo at 4:51) with untamed revelry (“Mad World”), Giannouli suggests a pas de deux between mind and emotion, leading to the discovery of a third presence, the spirit.  Closing piece “Untold” wraps this up nicely: once again sedate, still looking up: no longer obsessed, but inspired.  (Richard Allen)