A Certain Tide is the next step in the evolution of Joel Pike.  The artist’s early endeavors were hazy, ambient-laced piano EPs, but over the years, he slowly added strings and inched his way toward modern composition.  As the artist developed his sound, he slightly modified his name as well, and has now dropped his middle name (Nathaniel) from press releases.  The new album calls on a host of contributors and now includes clarinet and a string quartet.  It’s easily the most accomplished of his sets to date.  The distance traveled can be seen in the contrast between the majority of the tracks and the few remaining forays into ambience; the latter seems more like a vestigial limb, while the former is the functional body.

In an earlier review, we remarked that it’s nice to have friends; we were referring to remix artists, but Pike’s friends are now part of the main mix, and can be seen in the video for “Paean” below.  There seems to be a greater confidence in Pike’s compositions, partially due to experience and partially to the live recording of these pieces, which took place over the space of a few days.  The positive timbres remain apparent as well, which can be credited to the composer’s outlook and quiet faith.  Of the new set he writes, “it speaks of hope in the turbulence.”  He’s right; born of belief, this music seeks to operate as an antidote to modern malaise. 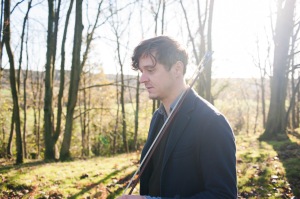 Tiny Leaves now seems much more of a group effort, and Pike is both generous and wise to allow his lively collaborators their space.  As early as the opening track and lead single, “Enfold Me”, he allows the piano to drop out (4:40) and the strings to hold center court, setting up an emotional payoff only hinted at in the earlier minutes.  On “Fevrier”, strings carry the main melody.  The sedate center of the album might have been trimmed a bit ~ this is the longest set that Tiny Leaves has ever attempted ~ but the late tracks pick up the pace and include the album’s most memorable cuts.  The first of these is the aforementioned “Paean”, three times longer than the video extract below, culminating in a stretch of pure ebullience.  The last is only 53 seconds long: the closer, “Streams”.  Fast, compact, and uplifting, this piece leaves the listener on a high note, amplifying the composer’s stated intention.  While calm, heard in the earlier tracks, is often seen as the antonym to turbulence, hope is its extroverted cousin, the agent of positive change.  (Richard Allen)