Walks on the Beach ~ Adoption Tapes 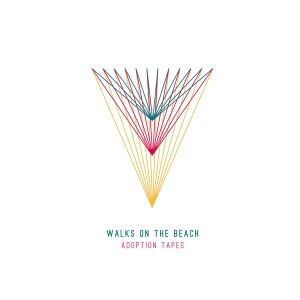 Integrating two genres or more is a very difficult feat to pull off, mostly because it implies the articulation of different, often even opposing, ideas about how music works. That Adoption Tapes is presented to the audience as a unified, collective effort, instead of a collaboration between two musicians (Jerry David DeCicca & Mike Shiflet) with fairly diverse backgrounds, reflects an approach that does not merely mix folk with noise, but that truly makes a synthesis, creating music that is as new and unclassifiable as it is compelling. In many ways it sounds like a harsher version of psychedelic folk, except its background does not really reside in the expansion of the mind, but in the reduction of it, grounding it upon a broken, jagged simplicity. This means that instead of letting simple harmonies grow and fill out the surrounding space, Walks on the Beach outright manipulates them or lets them end, only to further cut them up with experimental techniques. The result is an inversion of said simplicity, the revelation of an underlying unresolvable tension, like one of those surrealist paintings of sunshine in the dark.

Sometimes, the sound is clearly layered, a drone that rumbles anxiously below the certainty of a riff, although more often than not the traditional roles I expected each musician to fulfil were completely reversed, with the noise offering a kind of unity that the fragmentary, dreamy lyrics did not offer. This is where the integration of genres is at its clearest: there is no predictability to Adoption Tapes, and there is a very strong sense of direction, of a deep knowledge shared between the two musicians, the point at which the tradition upon which folk is anchored becomes an apt companion of brazen electronics. What they turn out to have in common is not so much a tendency for frontier-crossing – one as explorer, the other as pilgrim – but an urge towards precision (no sound goes to waste), towards constructing such a frontier in a minute a form as possible, sentimentally/traditional on one side and rationally/modern on the other. In this interpretation, the way in which Walks on the Beach crafts these approaches together makes the music sway from one side to the other in a very organic manner, inflicting some very vital cracks upon both.  The kind of precision that emerges is a fragmentary one (every sound has a place, and yet that place makes no sense if seen as a whole), a down-to-earth complexity that does not aim for the stars nor heaven, a trail that only goes forward and yet swirls and zigzags every few steps. Yes, it is simple music, easy to follow, but it is also confrontational and difficult to stomach – this is the point at which its simplicity becomes, under a closer listen, broken, preventing the mind from wandering off, be it due to a sense of possible predictability or one of possible uncertainty.

The video produced for “Colorization” hints at a psychedelic vision of the music – the depths of the earth as the unconscious, the back of the mind as the eons-bound planetary processes of life, a cosmic projection of the vastness of free imagination. Still, there is something disjointed about this unified conception that is reflected in the music itself as the harmonies become restrained right when they are about to take off, when images of lifeforms coincide with abrasive drones as well as with a bright, happy riff, when the usual psychedelic climax never comes to be. In a manner of speaking, this album plays psychedelic folk upside-down, as a journey towards the finite, towards failed verses and noise that is meant for focusing instead of scattering musical structures.

In the end, all these little disruptions reveal that no straightforward musical narrative fits the shape of Adoption Tapes, and it constantly strains and tears attempts to formalize it into some genre or another. That is, however, only a part of what makes this album so interesting in the first place, and it is an experimental treat in every way, all the way through. (David Murrieta)