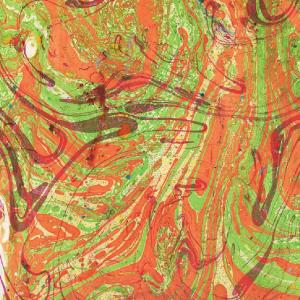 The cover is as colorful as that of Total Folklore, signaling the burst of energy that listeners will find within its grooves.  And after a short, surprising lullaby, the push is on, as “Cirrus” explodes in multicolor brilliance.  Yes, Dan Friel has done it again!

Life is an exuberant, energetic record that pushes its boundaries to the extreme, exposing Friel’s punk roots.  The recording levels remain in the red throughout, making the album seem loud even when it is being played softly.  Pockets of distorted pop penetrate the broken woofers of over-amped arcades; guitars battle behind the barricades.  The overall sound is like that of an amusement park run by youth after the last adult has left, bringing to mind the words of Bruce Springsteen: “the calliope crashed to the ground.”

Friel’s first instrument, a toy keyboard, is still his favorite, although it probably didn’t sound like this when he was a kid.  But now the artist has a child of his own, and has been thrown back into that sense of gleeful abandon that marks early childhood: louder, louder, louder!  As a relatively new uncle, I can attest to the fact that toddlers enjoy color, movement, and smashing, all of which can be found on this release.  And toddlers (in fact, according to studies, the majority of all music purchasers) care little about sound quality, so any distortion is just fine.  In the old days, that meant holding an A.M. radio up to one’s ears to catch one’s favorite song, even if the signal went in and out and sometimes converged with that of another radio station.

Life is short, but filled with potential hits.  For the moshers, there’s “Sleep Deprivation”, while popsters have the melodic “Cirrus” and new wavers have “Jamie (Luvver)”.  But for sheer euphoria, the two-part title track is the winner.  Graced by an impossibly catchy lead riff, “Life (Pt. 1)” does cartwheels all over the amusement park while balancing cotton candy in its hands.  The drums are slow, but the keys are fast, creating a sugary contrast.  A mid-piece breakdown provides a (very short) opportunity to catch one’s breath.  “Life (Pt. 2)” closes the record, sending the listener into the florescent evening with a mixture of nostalgia and adrenalin.  It’s not subtle, but it’s happy, loud and fun: not just life, but a good life.  (Richard Allen)