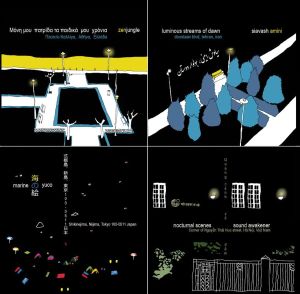 The always creative Flaming Pines label has just launched its third 3″ series, arriving on the heels of the successful Birds of a Feather and Rivers Home sets.  Tiny Portraits is a year-long series in which artists are invited to reflect on place, in particular “somewhere small, overlooked or obscure”.  It’s also a broadening of concepts first explored on Flaming Pines’ Australia-based 2013 compilation of the same name.  The first four singles (released concurrently) come from Siavash Amini (Iran), Yuco (Japan), Zenjungle (Greece) and Sound Awakener (Vietnam).  Arash Akbari’s sound map helps the listener to position the recordings in space.  Yet while the inspirations may be international, the tone is similar; these singles sound like home.

Given the theme of the last series, it’s appropriate that the new series includes the sound of birds.  Siavash Amini‘s Luminous Streams of Dawn (Doostan Boulevard, Tehran) isn’t what most people think of when they think of Iran – unless, of course, they live there.  This is one of the best aspects of the new series, as it connects threads of humanity and nature, and reminds us that the world is not all politics.  Soft tones undulate while the morning birds awaken and begin to sing their songs.  And as long as birds sing, hope remains apparent, no matter what the outer circumstances may indicate.  As the morning grows, the music grows, until the boulevard is bathed in light. 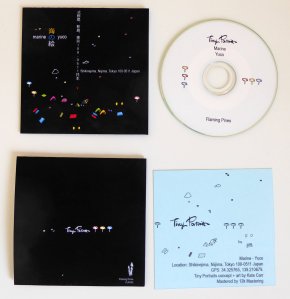 Yuco‘s Marine (Shikinejima, Niijima, Tokyo) heads in the opposite direction: to the shore.  Lapping waves introduce meditative tones like parentheses of peace.  This may be one of the shorter releases, but the price is right, and as one can see in the photo on the right, the presentation is loving.  If one were blindfolded and asked to identify the nation of origin, one would probably get this one right: a sign that the artist is on the right track.

Zenjungle‘s My Childhood Is My Only Homeland takes a maverick approach to sound and place; the clue is in the title.  In one sense, the single doesn’t sound like Greece, although it’s a lovely blend of piano and saxophone, graced with a flugelhorn sample from Nektarios Manaras.  But in another sense, it does sound like Greece; this is Zenjungle’s Greece, a place found in the heart rather than on a corner.  If childhood – or memories of childhood – is a refuge for a troubled heart or tumultuous thoughts, then it is indeed a location.  And this single, the most active of the initial slate, exudes both innocence and confidence.  It’s a place we’d like to visit, but we can only arrive there sonically.  That is, unless we too possess the imagination of a time traveler.

Sound Awakener‘s Nocturnal Scenes (corner of Nguyen Thai Hoc Street, Hanoi) seems to say two things at once: that Hanoi is loud, even at night, and that the sound of traffic can be soothing.  A few horns sound here and there, and snatches of conversation can be heard, but the overall sound is that of passing vehicles, decorated by a sprinkling of bells.  Could one sleep to this?  Perhaps in time, given an initial adjustment period.  The fact that even the horns are muted seems to indicate that the artist finds such sounds comforting in their familiarity, rather than off-putting due to their intrusion.  And this is the heart of place as it relates to the individual; our interpretation becomes our definition.

Over the next year, we can expect additional entries from Katie English, Sally Anne McIntrye, Cody Yantis and Sun Wei; we’re looking forward to hearing the series as it develops.  (Richard Allen)