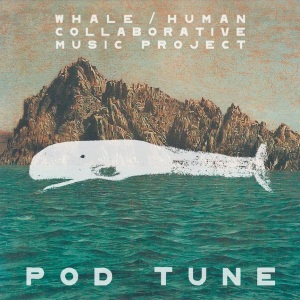 Before podcasts, there were pod tunes ~ long, intricate songs flowing from underwater behemoth to underwater behemoth.  These dynamic vocalizations carried stories of other pods in other oceans.  Together, the humpback whales would learn these new songs, sometimes hours long, and share them with those they met.  Even with dwindling populations, they continue this practice to the present day.

A humpback whale’s ability to memorize music is unsurpassed, and yet each rendition is different: a nuance here, an inflection there.  It’s easy to project our emotions upon the whales, hearing plaintive cries in the drawn-out lower registers and joy in the higher tones.  Yet their true depth of meaning lies beyond us.  Whalesong provides a window into something ultimately unfathomable: the life of the earth’s largest creatures, connected by ancestry and geographic expanse.

Humans have been fascinated by whales for years, although the earliest fascinations had more to do with wonder and the hunt.  For many years, Moby Dick provided the primary associations; the whale was considered an antagonist at best, a food supply at worst.  Yet a wave of sympathy began to develop as humans became aware of their amazing intelligence.  In 1970, National Geographic released Roger Payne’s landmark recording, Songs of the Humpback Whale, which went on to sell over ten million copies and introduced the world to the mesmerizing complexities and nuances of whalesong.  (A sequel, New Songs of the Humpback Whale, was released earlier this year.)

And now we come to Pod Tune, whose beauty cannot be understated, especially to readers of this site.  This collection extracts whalesong from the net of new age and substitutes an ambient component.  A much more flexible genre, ambient music allows for a huge variety of backing tones and harmonic convergences.  By surrounding the humpbacks with newer sheets of sound, these artists imitate the interplay of the whales themselves.  If the humpbacks refuse to be mired in the past, instead learning new songs on a regular basis, the least we can do is emulate their desire for novelty.

The initial surprise of this project is the quality of the contributors, who include William Basinski, Jacob Kierkegaard, Christina Vantzou and Loscil: A-listers of the ambient scene.  Additional joys await, perhaps the greatest of which is the overall quality of the entire set.  At no time do these artists overwhelm the whales, which would have been easy to do considering the fact that they are in essence performing duets with pre-existing material.  Instead, they seek to underline the power of whalesong.  Nor do any of the artists call attention to themselves above others; the set flows with a unified aural aesthetic, calling to mind the depths, the expanses, the deep blue sea.  In order for this to occur, each artist has to show humility – and to a man and woman, they do.  Their approach becomes a metaphor not only for the project, but for awe in the face of something larger than we can comprehend.

Across the course of the project, various contributors present deep, dark drones, the essence of the metaphorical sea.  At other points they offer the lapping of the waves, or tones that imitate sonar pings.  Tiny hints of static come across as hidden mysteries.  One artist sings; another offers a brief spoken lament.  And through it all, the humpback whales sing and swim, surface and dive.  Perhaps these very songs are still being sung by the very same whales; perhaps they are now singing newer songs.  As for us, we can now imagine a parallel, aquatic music world, free of mp3s and release dates, in which the newest, most beautiful music arrives in the throats of the world’s largest mammals.  (Richard Allen)