Kate Carr ~ I had myself a nuclear spring 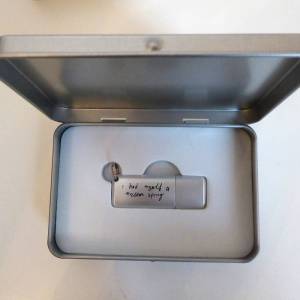 No stranger to creative formatting, sound artist Kate Carr has just released her latest work on a USB flash drive, housed in an aluminum tin.  While it may suggest smuggled secrets from Spectre, these recorded sounds are meant to be shared.

On the surface, the album is about the Seine, but in this case, the river is viewed from an unusual angle.  As Carr puts it, the landscape is “almost apocalyptic.”  She continues, “These muddy marshes filled with buzzing electrical towers, corroded machinery, shrieking birds and canals feeding a nuclear complex were like nothing I had ever seen.”  Local electromagnetism made even hydroponic recordings difficult, as heard in the ghostly, feedback-laden “The darkness of riverbeds”.

Carr presents a mixture of field recordings and light musical adornment ~ a guitar line here, a subdued beat there.  The sources of the electronics are harder to discern, as they may have been born from either the environment or the studio.  Whenever a hum or buzz intrudes on the mix, one is equally startled by the fact that the wildlife continues to bustle and that nature is taking back its own.  Waterbirds ~ too many to identify ~ make frequent appearances.  The opening track even includes a bleating sheep.

A secondary album theme is that of riverbank movement.  Carr visited the area at a time of recession, following a period of overflow.  To the artist, this section of the Seine became a metaphor for the boom and bust of the local town.  As the economy began to fray, its markings were left behind, abandoned by humanity but adopted by birds: nests in rusting boats, swans in nuclear ponds.  The lonely, drawn out nature of the music reflects this bittersweet shifting.  “Rising waters (alone in the dark) is especially elegiac.  The brief closer drops the instruments and returns to the start, but a human voice cries out near the end:  a sign that when nature suffers, humanity suffers, and vice versa.  (Richard Allen)

Tags: I had myself a nuclear spring, Kate Carr, Richard Allen