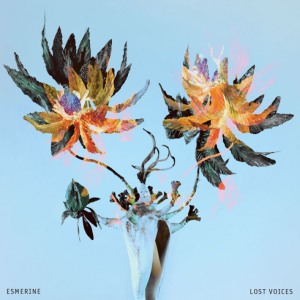 If there was any doubt about our pick of Constellation Records as our Label of the Year, this feature should prove it, as three of our Top Ten picks come from their stable.  GY!BE continues to cast a long shadow. The band continues to be relevant, and its influence can be seen throughout the industry.  This being said, there’s still room for expansion, even in post-rock, and an influx of youth has led to a recent boom in the genre.  By injecting timbres from different cultures with cross-genre influences, the field has mutated to something that still lacks a proper name; we’re just happy to be able to hear it.

And now, A Closer Listen presents the Top Ten Releases of the Year in Rock, Post-Rock, Folk and Jazz (although to be honest, it’s mostly Rock and Post-Rock this year)!

Esmerine ~ Lost Voices (Constellation)
An expanded lineup has led to the most unstoppable Esmerine album yet; this one rocks.  But fear not; the band’s subtleties are still there, from the Arabic inflections to the sweet, sullen strings.  Esmerine continues to surprise because they continue to change.  The distance traveled between their first album and their last is inter-continental.  And yet, something about the album still makes it feel like home.  (Richard Allen)

Godspeed You! Black Emperor ~ ‘Asunder, Sweet and Other Distress’ (Constellation)
A band so big that it influences our entire site, Godspeed You! Black Emperor continues to be relevant, outlasting generations of bands who have fallen by the wayside.  After Allelujah! Don’t Bend! Ascend!, we thought they’d be quiet for a while (at least in terms of releases), but it seems as though the band has gotten its second wind ~ or perhaps its third, or its tenth.  One thing’s for sure, they’re not going away anytime soon.  We couldn’t be happier.  (Richard Allen)

Heroin in Tahiti ~ Sun and Violence (Boring Machines)
This Roman duo pioneered self-described ‘death surf’ on their debut, but it was clear that the novelty of that idiom couldn’t sustain itself for very long. Rather than rest of their laurels, on their sophomore release Heroin in Tahiti push their sound into uncharted waters, a “spaghetti wasteland” of southern Italian folk music through the lens of psychedelic and prog-rock. The hype around Sun and Violence is easy to dismiss as overblown, that is until you actually sit down and let this 2xLP carry you away on a tour of the twin faces of Italian culture. (Joseph Sannicandro)

Jerusalem in My Heart ~ If He Dies, If If If If If (Constellation)
The third Constellation album of this Top Ten boasts one of the year’s best titles to boot.  It’s all the work of one very hard-working man, with a few friends rounding it out.  Even without the intended visuals, the music retains its power.  If this isn’t quite the year of the buzuk, it’s the still  a year in which Arabic music became even more essential.  The world may be in turmoil, but the sides are not as clear as politicians would have us believe.  (Richard Allen)

Kyle Fosburgh ~ One Night (Grass-Tops Recording)
Kyle Fosburgh’s music is the sound of a lost America. The country was young – an infant, really – and her fields were still fields. A century later, the isolated Central Park would come to be the only oasis left, the only remaining part of her youth still standing amid the cloud-breaking skyscrapers and the lost highways, but her scent remains, glued to the record. (James Catchpole)

Lightning Bolt ~ Fantasy Empire (Thrill Jockey)
The studio production of Fantasy Empire does not hinder the exciting, electrifying mess that is a Lightning Bolt album, and in fact, the band have truly appropriated it for their advantage. The result is their most subtle music yet (yes, subtle), much more aggressively fun than anything else they’ve done, opening a gleeful path of mayhem that is darker in tone, harder, even focused. It’s like reading Doom Patrol or The Invisibles instead of the brighter superhero tales of old, a cartoon violence with a purpose, self-conscious and determined to let the chaos seep instead of letting it immediately blow everything up with a crate labelled ‘TNT’, which is to say it’s Lightning Bolt at its maddening best. (David Murrieta)

Oiseaux-Tempête ~ Ütopiya? (Sub Rosa)
This pluralistic album was released before 2015’s horrific Parisian attacks, causing its music to ricochet.  Does freedom have a limit?  Should nations close their borders?  Is Utopia possible?  The album arrived just in time to throw itself into the debate.  The music echoes powerfully enough on its own, but the reflected glare of current events makes it shine even more brightly.  (Richard Allen)

Sundaug ~ Nocturnality (Self-Released)
Sundaug’s music is bright n’ breezy. The gentle plucking of an acoustic guitar, the tight percussion (produced by a light slap on her body) and the lovely sound of the sunshine soaking into the strings helps to give the music an exceptionally deep, soulful sound. Pure innocence is conjured when all you have is your guitar.  (James Catchpole)

Waking Aida ~ Full Heal (Robot Needs Home)
Resplendent with purple ghouls and Mario Kart references, the London-based post-rockers’ second LP brings the vibrancy of their debut but using fewer instruments (read: no violin), resulting in a more focused set. Maths still abounds in tricksy rhythms and the occasional glitchy beat, but Full Heal is far from soulless – there’s a full and loose sense of fun about Waking Aida’s varied songwriting, which seems to grow more accomplished each time we hear them. (Chris Redfearn)

YODOK III ~ The Sky Flashes, The Great Sky Yearns (Tonefloat)
Quiet to loud; titles as lengthy as the marathon songs; rock instruments elevated by orchestral timbres. This all sounds not only derivative, but almost prosaic. The Sky Flashes, The Great Sky Yearns, however, is as powerful and majestic as its title’s subjects, each of its four EP-length compositions delivering a calm passage on which thoughts can drift, as helpless as a raft in the ocean, followed by a tumultuous, horn-drenched onslaught that rewards listeners’ dedication with an almost spiritual-like sense of catharsis. Be patient – and be rewarded. (Chris Redfearn)