Seas Inside and Out ~ Stefano Guzzetti and David Cordero

Home Normal’s latest albums ~ one released on the last day of 2015, the other released this week ~ each serve as soundtracks to the sea.  The first of these works, Stefano Guzzetti‘s Ensemble, suggests the sea through its cover image and sound, while David Cordero‘s El Rumor Del Oleaje is more overt, thanks to its field recordings.

It’s not unusual to hear the sound of waves in ambient music, so as El Rumor Del Oleaje begins, one swiftly surrenders to the shimmering memories of a summer long gone.  The piano is soothing, the waves even more so; the layers of twinkle add a beautiful gloss.  January is the polar opposite of July, and as this review is being written, we’ve experiencing sub-zero temperatures for the first time in a year.

What is unusual is to hear water sounds throughout a recording.  Cordero has committed to a cause for this set, which has a lovely backstory.  Each of these tracks is connected to a specific time and beach, from Bizkaia to Cádiz, where Cordero and a friend traveled and recorded, seeking to capture “the healing impact of the waves.”  One can sense the inner peace radiating from these tracks, especially when they catch the sun at its zenith.  “La Casería – San Fernando” provides one of these moments, as the bass clarinet, french horn and double bass join Cordero on the beach blanket.  Overall, the album is a fine reminder of a peaceful, idealized summer ~ one of the sea inside as well as out. 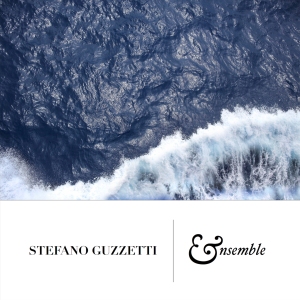 One look at Stefano Guzzetti‘s Ensemble and one is hooked.  The cover offers a perfect blend of stunning photography and evocative typesetting.  The letter “E” looks like an ampersand, serving as a symbol for the ensemble.  This is a different sort of sea ~ a bit more active, befitting the music, as one can intuit in the crashing waves.  The original small-run CD release (Stella Recordings) included elaborate packaging and has sold out, but an equally elaborate vinyl edition is still available with different art.

The titles indicate a love of the warmer months: “All our days”, “Kite”, “You and the stars”, “Endless summer”.  If Cordero’s release is relaxing, Guzzetti’s is playful.  As early as “Scusa”, the quartet (Guzzetti on piano, Simone Soro on violin, Giulia Dessy on viola and Gianluca Pischedda on cello) come out to frolic, with beach toys and colorful suits.  While the pace slows for “Womb”, it’s only for a moment.  Ensemble is the active sea, inviting bodysurfing and jet skiing, the reminder of a different blessing:  joy.  The string rush in the final minute of “All our days” provides a perfect distillation, while “The road to you” explores the season’s romantic aspects.  The album’s most active piece, “Escape”, provides the drama of winter wishes.  While we might not be able to escape to the sea in January, our minds can still wander to that beautiful place.  (Richard Allen)

An additional note of worth:  Home Normal is currently offering its entire back catalog (currently at 79 releases) in digital format for a bit under 40 GBP.  This seems like a ridiculously good bargain.  If you’re new to the label, why not give yourself a treat in the new year?