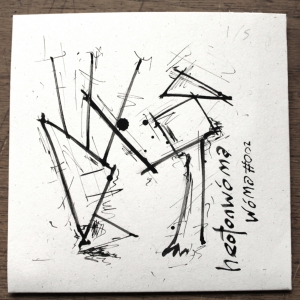 Significantly, poetry has always been, in some way or another, about sounds. So what happens when you listen to dreams in a language that has been long gone from our everyday hearing? How does it feel to sense the whispers of a ruined abbey, or the remnants of a castle that both belongs to you as history and is forever removed from your own life? These are the sorts of questions that might arise while listening to Wóma’s second album, entitled Heofonwóma, “a meditation on the concealed linguistic qualities of sound”, like the press release states. The entire project is in ancient English, specifically the Anglo-Saxon language, and the main components of these horn-like drones are bowed pieces of stainless steel. The album’s title can be translated as the ‘clash of the heavens’, a grand, noisy disturbance that in medieval poetry was used to refer to Judgment Day. These are myth-driven sounds, an evocation of a time that summarily surpasses our own in terms of depth and scale, a modern ritual that asks you to look up to the heavens (heofon) and attune your speech to its timeless mystery.

If language is that very first order of understanding, its evolution could indicate an incredibly complicated base, in the sense that it contains all of its variations up to and including those of its own time. A native English speaker might be able to better intuit how “Héafodwóþ” means literally ‘head-voice’, creating a very specific series of resonances precisely within that inner voice, possibly finding a primary, mystical gate to the language’s own sacred tomb, hidden within the recesses of speech modes and the sounds of contemporary words. The head becomes an echo chamber of past and present, a continuum of possible sounds that meld their forms and meanings – in other words, a drone that tremors throughout the imagination.

This inner experience, this poetry of history, is what Wóma seeks to activate by very material means. Steel has been a part of various societies for a while now, but something that makes it interestingly relevant for this project is that steel is also very commonly associated with modernity, with industrial production, with the capacity to do what the ancients could never even imagine. Unlike wood or other materials that are also as old as us, steel can immediately evoke grand visions of progress, of machines and factory workers driving humanity’s engines ever forward. Bands like Einstürzende Neubauten would wield that kind of association into a howling lament of post-industrial misery, banging the metal to the rhythm of decay. Wóma turns away from this focus on the present and the future in order to articulate a meditation on the past: bowing these strands of modernity – a metaphorical grinding of the past upon the present – is a mythical act, a profound distancing measured in cosmic-calendar time and space.

Each track is a form of sound (“Fnaest” means ‘blast’ or ‘puff’ of breath; “Efenhléoðor” is a ‘united voice’; “Swéghléoðor” could mean ‘a great roar’), most importantly, a form of human sound. Together, they make up the ‘clash of the heavens’, different kinds of voices and speech that not only relate the end of times as one more poem in the cosmic mode but which are also basic human actions, whether it’s singing together or screaming in anger. The intense resonance of the modern finds expression in the seeming simplicity of something undeniably common across history, a body that shares a kind of minerality with the Earth. In other terms, it is the smallest of gestures what detonates the greatest of events, the most uninteresting words what hides a sprawl of meanings, a drone so new it’s hard to find a ground for it that is not ancient.

In the end, Heofonwóma is an album full of ideas and imagination, a primitivist daydream in which the aural oscillations of metal being scraped constitute the songs of our ancestors as they collapse into our every word and thought. Listen to it carefully, for you might be able to catch a glimpse of the myths behind your voice. (David Murrieta)