International Contemporary Ensemble ~ On the Nature of Thingness 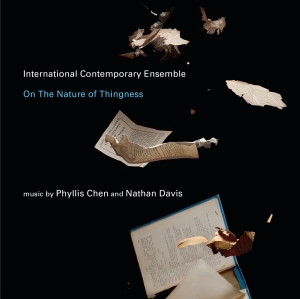 There is a certain ambient quality to On the Nature of Thingness. Like the name, derived from one of the pieces within, states, the whole can be interpreted as an aural reflection on what constitutes a thing, and the sounds such a relation produces. As a result, even the moments of melodic clarity become a swift diversion towards obscure side-effects and unconventional sounds. The International Contemporary Ensemble (ICE), who have collected here a set of pieces by composers Nathan Davis and Phyllis Chen, intermittently work and play their instruments, extracting sounds as much as setting them free in a swirl of imaginative processes. Whether it’s the prepared piano of Davis’ “Ghostlight”, filling the ears with the subtle sounds of piano strings themselves, or Chen’s “Beneath a Trace of Vapor”, which seems to turn the flautist himself into an instrument, the basic thread to all these tracks is the presence of objects that are inserted into unusual contexts, and that seem to require as little or as much attention as the listener is willing to give.

You can hear Chen’s “Hush” as a children’s lullaby, softly and carefully growing out of a not-so-chance encounter between a piano and a broken music box, a happy chime that revels in simple sequences and quirky little percussions. However, you can also hear it as an intricate exercise in piano preparation, a broken and fragmentary form comparable to Lou Harrison’s unifying “Concerto in Slendro”, achieving a similar sense of meditative peace by seemingly contrary movements: whereas Harrison’s piece moves upward towards the idea of a common human theme, Chen’s moves downwards, where a particular materiality lies, the touch of a child’s imagination, a sensory discovery of something wondrous at the heart of things clearly undone, or at least done wrong. These are senses that are conceivably all over the place, picking up connections between things completely unrelated, an experience of objects that do not come to life, but are granted one.

In this vein in which an utter fragmentation moves, Davis’ “On speaking a hundred names” is based on the idea of a religious meditation that cannot help but falter at the intensity of being unable to reconcile a deity’s multitude of facets. Something too large to be defined – the bassoon and electronics provide these ‘names’ as thick, shifting tones that quickly (for a 10 minute piece) become an extensive soundscape, ending, like it only could, with a powerful drone. The tables are turned – the player, and the listeners, come to be inserted into a context that surpasses them, thrown into a stuttering existence in which there is nothing but awe or terror; the bassoon’s gravity lends a bodily, heavy quality to each and every sound, an immense weight that does not allow the mind to soar, only skip and struggle.

This brings us to the subsequent “Beneath a Trace of Vapor”, by Chen, in which the flautist follows an atonal line reminiscent of the gliding tones of the Japanese shakuhachi. Other sounds are present, however, in the form of the flautist’s exhalations and inhalations, spread throughout the piece as quick incisions, as underground rhythms, as expansive background noise. These ‘traces of vapor’ imply a mechanical relation between the instrument and the player, involving them both as a steam machine that produces sounds. The flute becomes, in a way, a part of another, more complex object, one that hisses and blows with great force, a mechanical marvel that seems to have a life of its own.

Machines are central to “Chimers” and “Mobius”, also by Chen, in the sense that they both set the stage for the composer’s inventions (a word so technologically charged). The earlier was made by means of a modified toy piano, while the latter consists of the process of punching holes in paper for two music boxes to play, in a pattern that reproduces the famous Mobius strip. These pieces unfold as a double-sided flow in which seemingly conventional sounds twist into the shape of the unconventional, creating a sense of instability that might provoke listeners into trying to figure out exactly what it is they are listening to. Is it really just a toy piano? Or is it something else? That undefinable ‘else’ becomes the focus of On the Nature of Thingness’ particular reflection, things in hybridity, things in motion, things broken apart, things that are not supposed to be things… All of this falls perfectly in line with the titular piece, composed by Davis. Divided into four parts, this vocal piece takes Polish poet Zbigniew Herbert’s “Study of the Object” (the translation of which starts with “The most beautiful is the object / which does not exist”) as the first step towards a complete de-composition of language, breaking up its elements, turning it into an object of study subjected to an aural scrutiny that (perhaps necessarily) goes through a collage of Dadaist texts, a poem by Arthur Rimbaud and an Italo Calvino excerpt. “I made some things with things… An outside with an inside in it”, says the excerpt, indicating that mysterious ‘else’ that all these pieces desire, that ‘else’ that fills the album with an indefatigable pull towards ambience, towards hearing itself, whether in an ideal totality impossible to grasp or in quick exhalations that ground us to the world.

All in all, this is an exciting collection of pieces by young composers, and if you have any interest in contemporary or modern music, you should definitely get a ride on this train. You will not be disappointed. (David Murrieta)