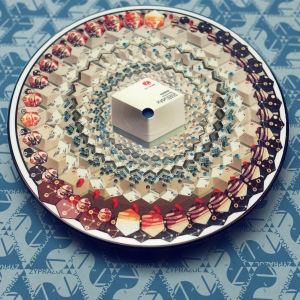 At year’s end, we realized that we’d already captured most of the year’s best music videos back in May.  So instead of duplicating our choices, we’ve switched a vocal video for an instrumental one and re-titled the article.  Enormous variety is on display here, along with a nearly-unimaginable amount of work.  In these videos you’ll encounter a marble machine, a runaway scissor, an animated disc, disco dancers, exploding stars and colorful paper scraps.  We’ve listed our own picks in recommended viewing order, from the measured to the insane.  As the visuals grow more hyperkinetic and the sounds more hyperactive, viewers may feel their minds beginning to blow.  We hope that you’ll enjoy what you see and hear.  And now, without further ado, A Closer Listen presents the best music videos of 2016!

A.N.R.S. III
Concept/graphic design: Antonina Nowacka
Animation: Bogumiła Piotrowska
Music: Antonina Nowacka (WIDT, kIRk) / Robert Skrzyński (Micromelancolie)
Album available here
The music is slow-churning, deliberate, and bell-laden.  The vocals are soft, languid, and holy.  This video is a perfect match.  The steady movement of these scraps of paper provides viewers a window into the album, as well as to the mindset of these two musicians.  Mesmerizing and hypnotic, these abstractions create a sense of curiosity and draw viewers toward the overall project ~ the mark of a successful video.

The Others
Director:  Hiroshi Kondo
Music:  notuv
We last saw an image-stretching technique like this on mukai jumpei’s solo scum, but here it’s been taken to a whole new level.  Without words, the video asks questions about our frenetic modern pace and our relationship with technology.  At the same time, the director illustrates the blurring of the soul lost in a sea of humanity.  All this in only two minutes!

A Small Escape
Director:  David Sandell
Music:  Oskar Vallinder
Those familiar with previous installments of Best New Videos know that we sometimes choose videos with music that act like music videos without being conceived as such.  This particular video, which recently won the top prize at in the animation category of Sweden’s Short Film Festival, is one of these.  It’s the charming story of a quaint little scissor who yearns to fly away, and does so with the help of its friends.  The score is part field recording, part ambient and part modern composition, and completely fitting, providing the uplift needed for the visuals to soar.

Ralf Hildenbeutel ~ Disco
Director:  Boris Seewald
Music:  Ralf Hildenbeutel
Album/EP available here
1250 paintings in 2 minutes!  This labor of love pays off in a big way, as this beautiful video celebrates art, music and life in motion.  Paint splatter and newsprint make one want to pause the video over and over to get a closer look ~ but it’s not as easy as it sounds to isolate the proper frame!  Credit some very patient painters and a director with a vision; they’ve brought Hildenbeutel’s pulsating piece to life in spectacular fashion.

Koloto ~ Fay
Director:  Sabine Volkert
Music:  Koloto
Track available here
Koloto returns in a big way with this vibrant, bell-toned single, graced by fluid animation that uplifts and affirms in equal measure.  Everything flows beautifully; director and artist are in perfect synch.  Here’s hoping we hear more of Koloto soon, as she prepares the follow-up to the Mechanica EP!

L’illusion de Joseph
Director:  Pask D’Amico
Music:  Al-Maranca in “Il ballo della coccinella sul panno bianco”
Joseph Plateau invented the phenakistoscope in 1832; in 2016, Pask D’Amico gives it new life.  The video was created by scanning and reanimating internet images, and exudes energy and verve.  As charming as the images may be, they also whisper of hidden danger, tempering nostalgia with shadow.  While watching, it’s impossible not to think of the work of Sculpture (below); time has folded in on itself.

Wintergatan ~ Marble Machine
Director:  Hannes Knutsson
Music/machine by Martin Molin
Track available here
Yes, we know, this isn’t exactly under the radar ~ but it’s one of the best videos of the year, and perhaps, given the construction of the machine, of all time.  With over 20 million views to date on YouTube and Vimeo, the video is a viral phenomenon, and has been followed by two “Making Of” videos.  2000 marbles go in and one great song comes out ~ but someone still has to load it, crank it, and play the bass guitar.  Molin’s ability to focus is astounding, and the payoff is divine.  Director Knutsson gives the project the treatment it deserves, making all those hours pay off.

Kota’s Beat Machine No. 1 (and 2)
Music and Direction:  Koka Nikoladze
Can’t get enough of homemade instruments?  Check out these charming constructions from Kota, who makes percussive instruments out of household objects (violin optional).  The first video is longer and better, but the second (seen here) features launched buttons and a sweet camera strobe.

The Comet Is Coming ~ Space Carnival
Director:  Morgan Beringer
Music:  The Comet Is Coming
Album available here
We last encountered Morgan Beringer’s work on Melt Yourself Down’s “Fix My Life,” and the new video also features the familiar saxophone, rapid pace and potentially epileptic images.  Wait for them ~ they appear beginning at 1:10.  This is about as high-energy as a video can get, and generates excitement for The Comet Is Coming’s album Channel the Spirits.  One could not ask for a better introduction.

Zyprazol 7″ animation picture disc by Sculpture
Audible: Dan Hayhurst
Visible: Reuben Sutherland
7″ available here
We should probably give Sculpture a lifetime achievement award; it’s ridiculous how many Sculpture videos make the grade!  Once again, this one begins with a picture disc and a strobe.  (Yes, you can do this at home, using a strobe that flashes 25x/sec!)  The video is downright bonkers, flashing back and forth from the record to additional visuals, zooming in and out, exploding with light and sound.  The track is enormously catchy as well ~ one of Sculpture’s most accessible to date, with a bass line to die for.  Even without the strobe, the vinyl is a thing of beauty ~ get one while you can!