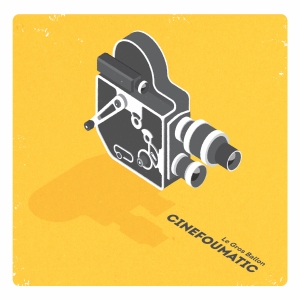 Spring’s happiest release to date, Cinefoumatic is a guaranteed spirit-lifter, the latest release from the Milan duo that sounds like a band.  Credit the use of 27 listed instruments, which means help will be needed for the concerts.  This time out, Francesco Campanozzi and Marco Capra were given a toybox filled with potential new sources, which they’ve put to good use.  We all know the happy sounds of the glockenspiel, ukelele, bells, bongos and rainstick, but what about the farfisa, bağlama, bouzouki, santoor and ektar?  These are the most exotic instruments outside of Constellation.

The set possesses an upbeat rock timbre that calls to mind everything from Led Zeppelin’s “The Battle of Evermore” (opener “Condorito Island”, and what a fun pun!) to the B-52s (the la-la-la-ing highlight “Iceberg, Stop!”).  The one-two punch of “Tervetuloa” and “Happy Sunshine Voilà” prompt excitement like a morning wake-up call, letting surfers know that the waves are breaking and the curls are pristine.  The languid whistling of “Fuji Mon Amour” is reminiscent of the lazy days of summer, as one lounges in an Adirondack chair with a cold margarita, waiting for the sun to set but not caring if it stays up all night.  There will be time enough to pay for the inebriation later (the slow, soothing, my-head-hurts piano of “Moderato Hangover”), but fun is to be had while it lasts.  Even the three one-minute interludes can’t slow things down for long; and by the time the album reaches “Sea You Sun”, the listener is sated.  Cinefoumatic is a whole day condensed into 38:42: just the highlights, with quick bathroom breaks.

Le Gros Ballon has always been fond of exclamation (their last EP was titled Hey! while a song from their last album was titled “Run!”), and it’s easy for listeners to get pumped up while playing their music.  They’ve also been flirting with the cinematic for a while, as evidenced by “Wild West Story: Land!” from Orange and “Alfred Joseph Hitchcock” from Hey!  On Cinefoumatic, the duo gives in to their lightest impulses with an album that follows a single thread from beginning to end.  It’s a story one loves to participate in: a happy romp over sandstorm shores, celebrating “Christmas in June”.  But this is an album for all seasons; whenever one needs cheering, the music of Le Gros Ballon is a good place to turn.  (Richard Allen)