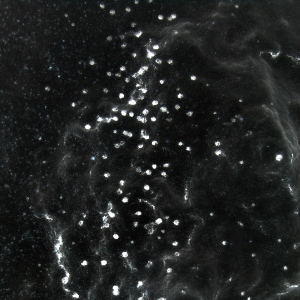 In the past few weeks, we’ve covered music from a washing machine, a marble machine, Xerox machines and Betamax tapes.  (Extra credit to the reader who can identify all of these!)  Now joining this intriguing list is Berlin’s Klaas Hübner, whose specialty is the ceiling fan, and who also constructs mechanisms of many sizes to conduct his sonic experiments.  A testimony to his success is the rapt attention of attendees at the Château Polet performance with Andrew Schrock, as seen in the video below.  It’s likely the first and last time they’ll encounter a portable house comprised of fans, ropes and musical tubes.  The duo not only amplifies the resonances of fan and tube; they reinforce the suspicion that both timbres and tempos exist within our houses and working environments.  Turn on a ceiling fan, and one may be distracted by the noise, until one cues into the repetitions and variations.  In this instance, the theremin-like whistlings coaxed from the tubes enhance a feeling of localized wonder.  Who knew that such beauty could come from something so seemingly maudlin and soulless? 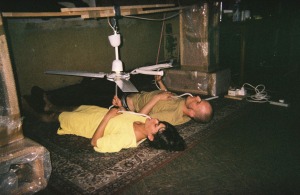 A similar effect is achieved in “music for ceiling fans and tubes”, performed with Lysandre Coutu­-Sauvé; the addition of voice through “whirlies” may strike a chord with anyone who ever sang through a cardboard tube (toilet paper, paper towel) as a child and was delighted by the distortion.  In this case, the voices don’t sound like voices; instead, they come across as high-pitched whistles akin to those of dwarves on their way to work.  Four minutes in, the racket of breath is joined by that of stick, as the duo bashes away at everything within their reach.  (A light bit of misdirection is displayed in the photograph, which makes the performance resemble a hookah session; this is instead the opposite, an exhalation.)  And in “single tube”, it’s all tube, whirling above Hübner’s head: a musical phenomenon that sounds like singing sands. 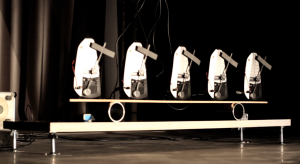 While these pieces are the highlights of the set (and sound better sequenced together), the remainder of the album offers different pleasures.  One track works with metronomes, another with airstream and gong; the three-part “schwarzwald” offers tape manipulation reminiscent of an unhinged Kid Koala, complete with whistles and warbles, scratches and screams.  As the sources are more common, the sounds are less unique.  Our advice: concentrate on the ceiling fans and tubes, because while there are many tape experimentalists, we know of no other ceiling fan and tube experimentalists, and the combination of story, sight and sound presented here is extremely compelling.  (Richard Allen)