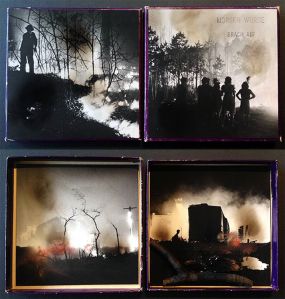 Summer is golden, but it’s also the lighter that ignites the forest fire season. As temperatures take flight, trees start to snap and wilt. The foliage smolders. Fiery tongues shoot higher and higher, mercilessly devouring the forest. Swirling drones with seemingly no direction indicate and mirror the plague of fire, catching on anything, spreading everywhere.

Fire engines and firemen in long, glowing uniforms stand guard, surrounding something that cannot be entirely contained. Helicopters hover over a vacant swathe of land.  The entire state has a bruise; the red, white and blue has darkened to a black and blue mixture, torched by the rampaging fire.  Although Brach Auf is an artistic interpretation, it doesn’t take much to imagine an apocalyptic scene unfolding right before the eyes.

Morgen Wurde sets the backdrop in place with a series of dark, physically heavy drones that chug out black, sooty clouds, leaving only ash and memories behind.  The thin, pure veins of a harmony are in there, carrying the oxygen, a vital lifeblood.  A female voice is sent into the sky, mingling with the noxious air.  The notes crackle in time to a series of inner, muted thumps, the branches snapping from within.  The sky projects an ill, yellow haze; you can hear its struggle and the pain within the scorched wood, the bark breaking like brittle bone. 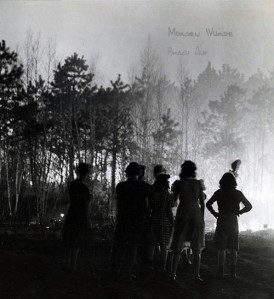 Brach Auf creases at its blackening edges, the smoky drones congealing in the air after a seismic event. The aftermath of the fire is both terrifying and spectacular. The delayed tones slow everything down, extinguishing the raging fire with a liturgical voice of melancholia, raining down and cooling the music with the tears of a tragedy. “Jemals Wusste”, which you can listen to below, weeps a deep symphony of sadness, of what has been irrecoverably lost and yet renewed at the same time. A newly found fluidity helps to clear away the music’s accumulation of dirty ash. The soot is wiped away and the layers of dust are brushed aside. Black timbers from a burnt home, once such a personal and precious space, are cleared away, and a new brick is placed on top of another. It starts to rebuild.

It’s always darkest before the dawn. The metallic electronics of the coda separate and congeal into something original, renewing and rearranging itself. You can easily overlook an important fact when staring at the carnage: this destruction, this ending, will always bring with it a chance to start anew. (James Catchpole)