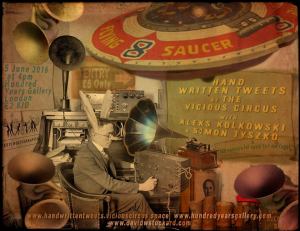 Modern folks, with their 8-tracks and cassettes and records, will be chagrined to learn that someone, somewhere, is taking a stand for human decency and the preservation of traditional modes of recording.  Yes, London’s Vicious Circus has just pressed their latest release on a dozen wax cylinders: one song per cylinder, each sold separately, with unique drawings by visual artist Julie Pickard.  The irony is that a form that was once mainstream is now considered experimental.  Invented back in 1887, these cardboard and wax constructions were once called records, in the same manner as American football was called soccer.  Now “obsolete”, they have created a collectors’ market.  But how to resurrect such a approach?  Fortunately, Vicious Circus was able to enlist the aid of recording technologies specialist Aleks Kolkowski, who expertise brought their wax cylinder vision to life. 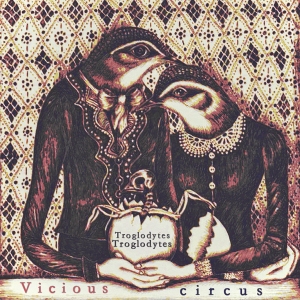 Hand Written Tweets received its public debut at the aptly named Hundred Years Gallery, where the group accompanied their recorded improvisations with a live layer, creating the strangest of hybrids, seldom heard in the 21st century.  But as those familiar with the group’s 2014 album Troglodytes Troglodytes are aware, this team (Elo Masing on violin, cello, electric guitar and whistle and Dave Maric on synth and electronics) is no flash in the pan.  Their cuts are concise and well-formed.  They take improvisation seriously, while presenting it with a wink.  A sense of fun is apparent in the spoken word of “Every Living Hour”, which ends with morose bow draws, akin to the sound of a begging dog; the bulk of the album walks a tightrope between drama and pathos, as if saying, pull off this card trick or die. 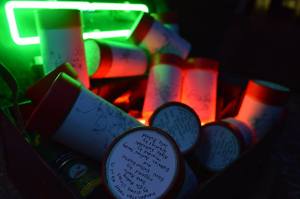 And so, in addition to being a unique release in form, Hand Written Tweets (likely to see digital release later this year ~ not a capitulation to the general public, but a gift to fans) is also a compelling EP comprised of 12 two-and-a-half minute tracks.  The anti-modernity bias is in full form here, having been introduced on the former album’s “MYDEATHBYHASHTAG” and continuing on “Hand Written Tweets”, a bonus track found only on Soundcloud.  The new EP picks up the discarded idea and runs with it ~ likely running with scissors as well. 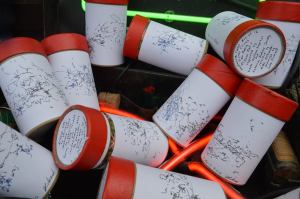 Don’t expect high fidelity.  That’s kind of the point.  In a backhanded fashion, these recordings mimic the recent degradation of sonic material found in digital compression.  The general public claims not to care about pristine recording: so here’s a modern ghost.  Each track begins and ends in static, wearing the clothes of its master.  The project comes across as something unearthed, despite the fact that it is new: the sonic equivalent of new torn jeans.  The violin is present like a plaintive cry, especially poignant on the mournful descending glissandos of “#2.”  “#3” shows some warp, like the line between eras bending in space.  The whole project possesses a sci-fi quality akin to classic black-and-white films, themselves a fantasy when cylinders were invented.  When the strings mimic a theremin, the association is cemented.  “#4” sounds like a demented music box playing The Eurythmics in fast forward; “#7” like a murder of chimes; “#8” like The Little Engine That Couldn’t; “#9” like a mournful wind.  Each piece is distinctly unusual, while the project as a whole is unlike anything most music fans have in their collections.

Our curiosity got the best of us, and we prepared a few questions for Elo and Dave.

First of all, congratulations on doing something that no one else is doing, or perhaps has ever done in such a manner. When did you first hear a wax cylinder in person, and what inspired you to adopt the format for your current release? 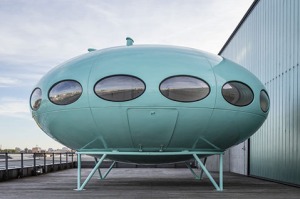 I (Elo) personally hadn’t heard a wax cylinder played back on a phonograph live before we recorded our album. I’d of course heard digitalisations of early 20th-century wax cylinder recordings, and also the “recreation” of Vasilisk Gnedov’s silent Poem of the End recorded on wax cylinders, played on Simon Tyszko’s Isotopica on Resonance104.4fm once… But never had the chance to hear a phonograph actually play a wax cylinder to me till we recorded them in Futuro House in March 2015: in the recording process, we also played a few of them back to make sure they were recording OK. For me, the inspiration came partly from the current fashion of recording on older media, such as vinyl or tape – and I thought, why not push this even further and take the oldest recording technology there is. Also, the dynamics of our duo: violin – an old instrument with a long and rich history -, and Dave’s electronics – new cutting edge technology – create this interesting time-warping melange of the old and the new that we felt was very much suited for recording a set of wax cylinders in a space ship (www.futurohouse.co.uk).

What other “obsolete” technologies, artifacts and/or attitudes do you find attractive? Conversely, what modern sonic advance or invention do you find the most appealing? 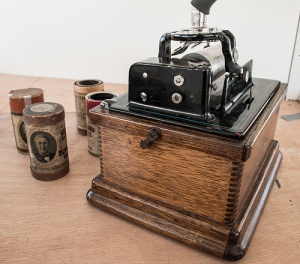 I very much like handwriting – something that could be seen as becoming obsolete as people more and more use computers and tablets and smartphones for writing things down. I admire beautiful handwritten letters from the 19th century and earlier, and handwritten musical scores. I also very much like old gramophones and gramophone records.
I think it also needs to be said that I believe very much in the live performance – in an age, where music is so ubiquitous in various recorded formats, live performances are these very precious opportunities to become present in the moment and to experience something unique and unrepeatable. In a way, the Hand Written Tweets wax cylinders as objects underline the importance of live events as well – one would rarely have opportunities to play them back, and one would have to especially seek out those opportunities, and thus, hearing these recordings becomes a precious one-of-a-kind occasion, something that can take the listener away from the perpetual background chatter of recorded sound we hear all around us all the time and make hearing a recording a live-performance-like event. In a way, saving the recording from drowning in a sea of noise…

Do you draw a line between the lo-fi quality of this recording and the loss of quality in mp3 compression?  If the recording medium is “ancient” and the musical style is “futuristic”, do the two cancel each other out or create a new hybrid? 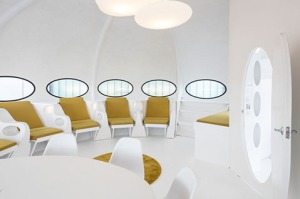 (Dave)  No, not really. Wax transforms the recording into something new, mp3 doesn’t. At one point though, we contemplated releasing a recording on floppy disk… Hahaha.  In my opinion, what I hear on the cylinders is definitely a hybrid, like future in the past tense, or vice versa. Or something that one could imagine, say, in the year 2116 could be heard in the musical archives of sound samples from the beginning of the 21st century. The cylinder recordings have this aura, this atmosphere about them, a bit like old futuristic drawings of what people imagined in the 1930s that the year 2000 might be like… Only the other way around, imagining what the people of the future would perceive our time as. Something very touching and human, and at the same time very strange and futuristic… I’d be interested to know though how other people hear our cylinders, what thoughts and images these create in them. 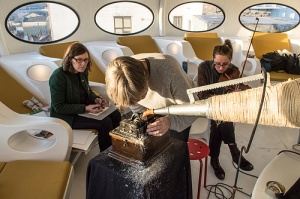 Which of these tweets was your favorite to create?

In the creating process, I personally didn’t have any favourites, the whole recording day was fantastic, and making each Tweet was a unique and thrilling experience. I got a bit tired towards the end of the recording process though, that I remember, but the music maybe got even better towards the end… I somehow especially like the last Tweets, #11 and #12.

What’s next ~ not only the future versions of the current release, but upcoming projects and concepts?

We are currently working on a soundtrack for an Estonian documentary film called “Armastus…”, which is about a couple of rather over-the-top arty but criminal characters with a penchant for alcohol abuse. We are also planning some concerts in Berlin for autumn 2016. And there is another rather pompous idea we have, but it’s too early to tell. Get back to us in a year’s time or so!  😉

Vicious Circus, thanks for your time, congratulations again on the new release and please keep us updated on your next project!