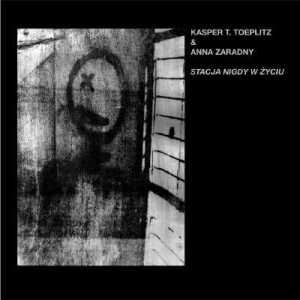 How to best translate the live experience to the vinyl experience?  Play it loud.  Having been (pleasantly) deafened by Anna Zaradny at the Unsound Festival a few years back, I was heartened to hear two new LPs from the artist this season: the current collaboration with Kasper T. Toeplitz on Aussenraum and a solo set on Musica Genera / Bocian Records.

Zaradny has always played well with others, and the combination of her saxophone, Toeplitz’ bass and the electronics of both produce a mesmerizing effect.  As indicated by the title (Station Never in Life), this is a station that doesn’t exist, a template that isn’t written, two performers passing each other on two trains during a thunderstorm, spewing static that melts the metal rails.  The beauty of such collaborations is that they seem to come out of nowhere.  Any resulting squall is normally heard once – improvised live – and disappears into the memories of listeners, who struggle to recreate the specifics of the non-compositions, eventually recalling only the feeling and tone.

“Jamais” just grows and grows, like a silent protest that becomes an exclamation (exploding here at 13:22 in a deep rush of bass).  The press release implies that the piece reflects a soul-felt “NO!”, as in “No, I won’t accept your point of view, whatever you may say or do.”  Yet it also implies morality, a reaction to the mainstream, to the teeming masses eager to listen to dictators and demagogues.  This same reaction trickles down to the personal regions of religions and relationships, but it means the same thing: the loudest voice is not always correct, and the most popular movement may be wrong.  It’s ironic then that this music is so loud, and invites volume; a further irony is that in its own avant-garde fashion it manages to imitate the classic ‘Til Tuesday track Voices Carry, a rare instance of Top 40 getting it right, Aimee Mann singing he said, Shut up louder than the voice of the original bully.

So no, Zaradny and Toeplitz will not shut up, not now, never, jamais.  The flip side, “Never”, is even more ominous, more insistent, deeper still.  Zaradny’s saxophone now sounds like a power drill, the electronics like misfiring circuits.  This is the music of reaction that causes its own reaction, feedback that produces feedback, an insistence on protecting one’s own soul at any (irrelevant) expense.  Yes, one needs to turn this up in order to appreciate it, but in the same way, one needs to turn up one’s own inner voice in order to break through to a purer, more honest life.  If Stacja Nigdy w Zyciu serves as a lens for empowerment, the artists will likely be proud; this is their statement, but it need not remain exclusive.  (Richard Allen)