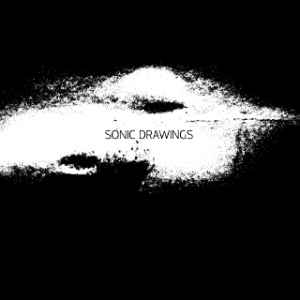 Sonic Drawings is a meditation on sound, noise and musicality.  As such, it may be a reaction to genre tags, especially that of “non-music” awarded by Discogs to Etzin’s last outing, TransMongolian.  Can we term the sounds of our environments – natural and otherwise – music?  By the wide definition, yes, although they may not be as composed as Etzin’s new creations.  These drawings begin with field recordings before entering different fields, coming across as experimental due to the form of their permutations.

And so, as the set starts with what might be interpreted as the sound of an animal being prepared for slaughter – grunts offset by the starting of machinery – the brain attempts to discern patterns, even though none may be intended.  This is how the mind works, attempting to impose order on chaos. The second piece, “Vinschgau”, contains some of the album’s most striking moments, especially the overlay of cowbells with motorbikes and drones.  When a church bell tolls, one recognizes it as the most intentional of sounds, although church bells are often pre-set by metal dial, mimicking human initiation.

As with most Gruenrekorder releases, Sonic Drawings is an invitation to translate sound into thought, and in these instances, one begins to wonder about the ability to tidy up one’s personal sound field.  Those in industrialized societies have greater resources to do so, although the higher end of control may prove prohibitive to all but the wealthiest.  “Vinschgau” represents the sweeping of sound into sonic piles, neat and orderly, the sound art that our minds attempt to paint, but so rarely succeed at doing.

At 35:36, “Garten” is nearly 70% of the set, making the other pieces seem like prelude.  In this piece, Etzin is able to take his time.  The low hums of its origin will not last; the motorbikes and bells return, this time foreboding.  Is this music?  Is this noise?  It all depends on the listener.  It’s one thing to those who play it at home, another to those embedded in the initial environment.  One wonders what they would make of the topplings: sounds into rhythms, splices into loops, the creation of a near-techno soundtrack from the scrape and bustle of the city.  Or the brushing of an evening scene into a muted watercolor swirl.  For a while, the tones converge on peace, before a marching beat tramples all over them, sending them into a dreamlike fugue.  For nearly a quarter hour, the sounds are are soft as fog, the beats returning only in the final minutes like a bracket meant to keep them from escaping.  When the disc is done, the sounds of ordinary life rush in to fill the gap.  (Richard Allen)