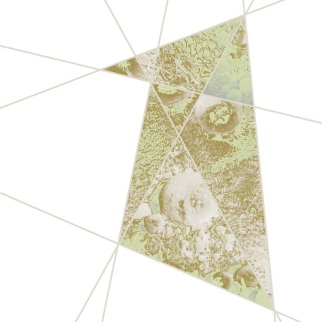 Fade likes to swim in the deep end. At first, the music’s unprepared, because the young notes struggle to keep afloat as they desperately attempt to ride the choppy, electronic waters. Be it an act of bravery, daring, or just a little bit of bravado to impress the girls, the staccato-scribbled microtonal notes contrast and compete with the submerged harmonies, creating a dense and intriguing listen. Manchester’s Schoolhouse demonstrates a high degree of skill as he plays around with his electronic sketchbook, the notes pulsating and then sinking, strobing and then receding. There’s nothing shallow about this.

“What Was Said Can Never Be Undone” is the first of two long-form tracks. At first, there’s a lack of continuity as a group of notes briefly flirt with chaos, pushing their luck and their boundaries like careless teens at a pool party. In short, they get into trouble. Populated by light, unresolved glitches, a pulsing drone gradually appears, and this is where the music starts to find some stability. Hovering like a UFO over Rendlesham Forest, the metallic drone gives off a sleekly produced sheen and a silver, heavy tone that lightly shakes the roof of the trees.

The spinning notes start to pick up some serious speed, creating an incredibly smooth ride despite the ongoing risk of dissonance. There isn’t any real friction to the sound apart from the lower thrum of the bass, and Fade never becomes an abrasive listen. That’s the last thing it wants to be, because there’s a gentle, gliding kind of momentum to the music, like the Eurostar as it swooshes through the countryside, taking passengers from continent to continent. Indeed, the sweeping rhythm that overtakes the drone sounds like an advanced piece of transportation as it chugs over the rails at a blazing rate. A distant and yet very relevant beat gels the spinning rhythms until they’re united. As this happens, an underlying drone buzzes away pleasantly and the steady beat is allowed to slowly drop out of college. Chirping insects populate the fields and hang from the bars of music, but they soon fade away. “Gran (D)” is much softer, its cycling and revolving tone simulating a virtual ballet.

Despite being a minimal record, Fade presents the listener with quite an impressive range of electronic timbres and colors. There’s still a bit of give to the music; it can bend a little. An intermittent pulse pushes itself through to the core of the record, and it becomes a strong, central pillar. Without it, the music would be lost to a gang of microtonal rebels with no police in sight; the record would have succumbed to a forty-minute reign of terror. Radio interference causes the last track to stutter, but it’s strong enough to withstand the disruption and it doesn’t show any signs of breaking up. There’s a lot of activity, but there is a pattern here; an unencrypted code can be interpreted, the symbols deciphered. The stammering, scrawled opening always finds a way to resolve, becoming something that’s deep and steady, a reliable, stable heartbeat at the center of an unpredictable world. (James Catchpole)