Blue Blue Youth ~ We Are Wood And Likely To Burn 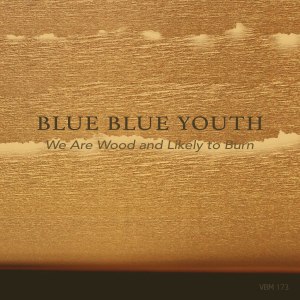 The EP is a slow burn, reflecting its title: a smoldering cigarette in the woods, sunlight funneled through a magnifying glass, a carelessly abandoned campfire, an overworked fuse.  These are the dog days of summer, days of heat shimmer and red flag warnings.  All is brown and tan, waiting to burst into orange and red.  Those who can stop it ~ who should be vigilant and aware ~ are passed out from heat and lack of hydration, asleep at the controls, headphones blocking out the sound of the alarm.  “I Should Not Have Slept”, admits one title.  “I Think It’s Death”, declares another.

We Are Wood And Likely To Burn.  The synth and guitar of Drew Diver (Soda Shop) and Julian Brau (Suturee) are accompanied by rustlings and reverberations: licking flames beneath the leaves.  The bass is deep, the woods are dark.  The duo’s album sets and maintains a somber mood throughout, bursting into intentional disaster early in the fourth track.  Death has come, raging and apathetic, devouring all in its path.  The wind rushes out, the drone rushes in, surrounding the listener on all sides.  There is no time for a fire shelter.  As the track ends, the sounds grow harsh and unforgiving.  All that remains is the aftermath.

The final two tracks survey the remains: those who could not escape, and the detritus of those who did, burned in the fire: twisted metal, melted plastic, and pockets of singed cloth, borne on the wind.  What started as a siesta has ended with a final fatalistic look: this did not have to happen.  When the drums finally arrive on “And Then One Night The Shapes Returned”, they seem morose, like a funeral march.  Then finally there is peace; the ground is silent, the mourners have all gone home.  Listen to the sounds of the untended night at the end of the EP.  Will the next warning be heeded?  (Richard Allen)