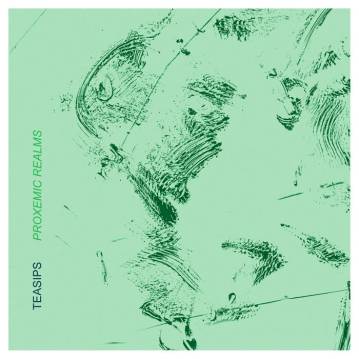 Please allow me to introduce you to the cleansing, evocative music of Teasips (Angela Frances Wilson; she’s also one half of Electric Sound Bath). Enveloped in a sightless fog, these slow moving songs rise up and out of wide, cold lakes, at first bubbling to the surface and then leaving behind a line of gentle ripples, like an unexpected visitation from Nessie.

Arriving on a gentle crest of air, her pan flute sighs with a modest beauty and a hint of undeclared sorrow, like a windy, overcast day in October, a season where the unfailing promise of winter is just around the corner.

Reflective more than somber, Proxemic Realms is a cleansing meditation designed for deep breathing and comatose thoughts. Vapors of steam rise up and are sent out into the world, the flute’s uncoiling notes playing a melody perpetually encased in a cold loneliness, uninterruptedly unwinding. For the longest time, the fog doesn’t lift. At times, the fragile melody is almost extinguished, but even though the dull sky carries a breeze, the wind isn’t strong enough to snuff out the music.

The low clouds shield the moors, lowering the visibility until things are barely there, the mountain a brooding silhouette against a grey day. Distant thunder and the promise of rain help to perpetuate a peppermint clarity, and the record immediately settles. A wide lake sleeps under an overcast sky, and then the rain begins to drizzle, collecting in the drains and the dregs of the road. Puddles form as the music rests in the midst of rainy season. Moody and damp atmospheres writhe around in slow motion, their tentative tendrils and tentacles caught in the sound.

Like the rising of dawn over a Far Eastern forest, the music is a calm sight. After the initial rumbles have subsided – after the floods – a ghost of a melody works its way in. The pan flute is all spirit, its thin, vulnerable echoes painting the air. A cold, barely there draft of air blows through the flute; it also surrounds the flute as it passes through the grassy valleys and walks over the silent mountains. The thunder is either on its way or has recently passed over, but it never presents a danger or a threat. It only adds to the feeling of serenity, and as the sky opens and the rain falls, the leaves start to flop, buckling under the weight of teardrops. A drone replaces it, keeping it company for the rest of the way.

Trees rustle as they breathe out a deep sigh of relief. The air is full of a mystic, mountainous awe; the flute lives in a quiet world of secluded secrets, white magic and sacred rituals. The pan flute is a perfect fit for ambient music. Teasips provides introspective music of great beauty, of solitude and absolution. (James Catchpole)