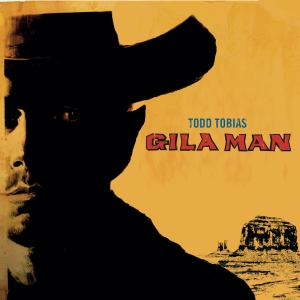 Hidden Shoal and Tiny Room Records promise a “psychedelic sci-fi western adventure”, and that’s what they deliver.  Arriving at around the same time as HBO’s remake of Westworld, the timing couldn’t be better.

The album starts with electronic horse trotting, and proceeds to run through a variety of styles, referencing everything from Morricone to Wakeman.  At times, the tracks shift mid-piece; “Race to the Barrens” starts off sounding like a large band of outlaws and ends up like a small family of snakes.  But whenever the timbres turn foreboding, Chloe March’s wordless vocals center the listener like a comfortable couch.  “Howler’s Hill” seems to launch into space, or at least the space one might encounter in “Cowboys and Aliens”, the clash apparent in the jangly guitars and theremin-esque vox.  When the dark chants crash into a whirlpool of galactic wind, the album’s hybrid nature is exposed.

Todd Tobias seems to be having a lot of fun on this album, playing all of the instruments and exposing a love for classic B movies of multiple genres.  One imagines a childhood sprawled in front of a cathode tube TV, popcorn in one hand, pop gun in another.  Some of the tracks are mere sketches, shorter than a commercial break, but each manages to contribute a mood: for example, the attacking percussion of “Talon” tumbling into the hypno-ray opening of “Doctor of Mars”.  There’s even time for an excursion into ambience, the wisely-titled “Mirage”, which shimmers like a heat puddle in the noonday sun.

Yet more than anything, the album is about action.  As the distorted bells toll on “Dowser’s Leap”, one imagines the townspeople gathering to witness the final shootout.  After vanquishing the enemy and returning to his original trot pace for the closer, Tobias blasts off on his supercharged, bionic horse.  Shane!  Come back!  But it’s too late; he’s already left orbit.  (Richard Allen)