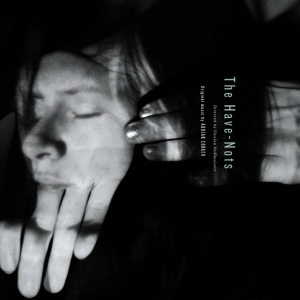 Are soundtracks getting better, or are we just enjoying them more?  It’s hard to tell.  Either way, 2016 has been an especially good year for creative scores, the latest example being Adrian Corker‘s The Have-Nots.  Our measuring stick is simple: to succeed, a score must stand on its own, which eliminates many mainstream entries, hampered by repetition, the lack of memorable minor themes, and an overload of incidental music.  Not so the score for The Have-Nots, which needs no visuals to make a visual impression.  Even a 46-second track such as violinist Aisha Orazbayeva’s “Faustina” makes an indentation on the ear.

But this is Corker’s show, and he catches the attention from the very start with a locked groove ~ not the way one typically begins a soundtrack, but a swift way to distinguish it from competition.  Assembling a quartet of violin, viola da gamba, cello and double bass, Corker establishes that this will not be business as usual; one leans in to hear what the musicians will have to say.  Experimenting with the degradation of acetate, Corker also plays music that by nature can never again be played, save for echoes caught in loops.  The ephemeral nature of such sounds reflects the dissociative tendencies of the characters in the film: the memories degrade, the impact fades.

The opening notes of the trailer (from Laurence Crane’s lovely piano piece “Andrew Renton Becomes an International Art Critic”, also on the soundtrack) provide little indication of the danger ahead.  But wait until 1:37 of the trailer for a snippet of the distorted drone “Index”, recorded with Lucy Railton, and one can sense the wheel beginning to turn.  A girl scolds the camera:  “Bad, bad, bad!”  It’s clear that something is amiss.  The contrast provides the album with a welcome tension that tries to hide beneath the skin but is all-too-quickly exposed.  The dissonant tones of “Supermarket” form a bracket around “Renton”; no matter how one attempts to keep one’s loved ones safe, it’s often to no avail.

From this point forward the score is pointedly dark, colors fading like the palette of the film.  The finale, an a cappella John Cage cover with words by e.e. cummings, seems intended for the end credits, but instead of comforting, it continues on an unsettling trajectory, less suited for popcorn than for an after-film drink.  Whatever the merits of the movie, the score is a winner.  (Richard Allen)