Black lights and heat vision goggles allow humans to see hidden aspects of the visual spectrum.  Fewer aids are available for the hearing sense.  When we need help, we use dogs and Geiger counters; but vast sonic worlds continue to resonate, unheard by human ears.  Kassel Jaeger addresses this dearth of hearing in Onden by combining organic and electromagnetic recordings.  To listen is to hear as few have ever heard.

The ear struggles to make out the sounds of church bells, distant traffic, crickets and birds: night recordings, made in Tokyo, familiar found in buried snippets.  The amplified foreground is electronic: wires and radio waves, cellphones and signal data, recorded during a Shinjuku day: an inversion of sound.  Two worlds collide, each equally real and equally lost.  One – that of the natural world – has been sliced from its moorings.  The other – that of the electronic world – bleats in silent cacophony.  In the real world, no one hears both.  In space, no one can hear you scream, but people do scream (at least in Alien).  On earth, no one can hear your electrical field.  But what if they could?  Would these frequencies operate as an ongoing tinnitus, or eventually fade from consciousness like the sounds of crickets and birds? 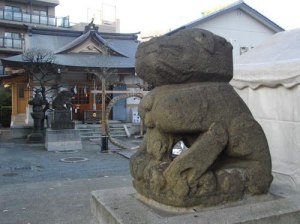 Jaeger calls these sounds “sonic ghosts”, and names his album after a hidden field marked by a deserted shrine.  The implication is that the world we see and hear is not the only world.  But this is not The Matrix; it’s more like a spiritual metaphor.  Words carry hidden meanings; settings hold secret sounds; religion identifies invisible planes.

Whenever a recognizable sound breaks through, the mind gravitates to its comfort.  Yet Jaeger’s buzzes, hisses and drones have a different effect.  On the one hand, they produce a sense of wonder: what gorgeous sounds we cannot hear!  On the other, they produce a sense of guilt:  have we replaced nature’s sonic beauty with that of technology?  On Onden, the forgotten and the unheard meet in the same field: cousins in misery, seeking a truce.  (Richard Allen)