The Eye of Time ~ Myth I: A Last Dance for the Things We Love 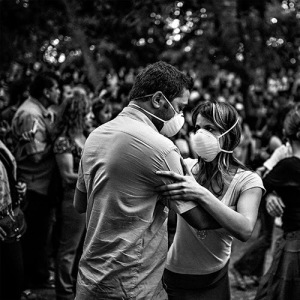 Marc Euvrie (The Eye of Time) has embarked on an ambitious project, a triptych of releases inspired by loneliness, the power of myth and global conditions.  The cover art, a recent photograph by Emin Özmen, demonstrates the contrast between hope and fear.  A similar contrast is created in the theme of spiritual desertion.  The opening track, “God is your loneliness”, begins and ends with the sound of church bells, as if to mock, invite, and embrace all at once.  The overall impression is one of competing thoughts: a sadness at the thought that religion might not be true, and a difficult-to-eliminate hope that a higher power might still be present, yet silent.  This is not a new theme; present throughout the book of Psalms, it simply finds new expression here.  But with fewer people reading than ever before, music may be the new literature.

The loneliness of the sound is a reflection of time spent away from home; while recording, the artist sunk deep into his own psyche, seeking meaning and independence.  The struggle is apparent in the yearning of the cello, drenched in tears.  On “Mass”, despair seems to win, especially as a distorted voice intones, “a world of darkness … a world consumed.”  This segment, perhaps a bit too obvious (yet a reflection of the artist’s hardcore roots), nonetheless reflects the words, “What hurts me most is this – that God is no longer powerful” (Psalm 77:10, TEV).  The final minute would not be out of place at a funeral.

So what then is the swift piano on the title track?  Is it light?  Is it the power that comes from deciding to do good even in the perceived absence of a higher power?  Read the liner notes, and one realizes that the cover depicts a tango, a peaceful protest, an insistence on forward movement.  A tango is a partner dance: we are not meant to be alone.  This image may have been of some comfort to the artist, whose times may have been dark, but not as dark as this summer’s violence in Taksim Square.  What does it mean to dance at the scene of an attempted coup?  The military drums enter on the fifth track, but the impression has already been made.  An image becomes a memory, a memory becomes a story, a story becomes a movement, and by that time, it’s too late.  Experiencing such heart, some may revisit their image of an absent God.

Part II: A need to survive is next on the docket.  For now, we’ve got plenty to think about.  If the next two parts are as strong as the first, this is going to be an amazing triptych.  (Richard Allen)

Tags: A Last Dance for the Things We Love, Denovali, Myth, Myth I, Richard Allen, The Eye of Time