There’s no artist quite like Sculpture, a duo who has carved its own audio-visual identity and whose sound and look are instantly identifiable as their own.  The combination of creative electronics from Dan (Critter Party) Hayhurst and zoetrope animation from Reuben Sutherland has resulted in a series of collectible vinyls over the years, the latest of which continues to beguile.  One can imagine the duo in an alternate sci-fi universe, making field recordings of geometric shapes, as shown in their press photo.

Once again, there’s an amazing video (seen below).  Those who view it will likely exclaim, “my record can do that?”  Yes ~ simply aim a strobe at the turntable, flashing at a rate of 25x/second.  Or enjoy the fact that Sculpture has already done the work for you.  The record is kaleidoscopic, phantasmagorical, alive.  Zero in on the details and one will see wonders beyond the grooves.  But seeing the whole thing in motion is like simultaneously viewing all aspects of a circus.  We’re guessing this was the hit of the Shiny Toys Festival. 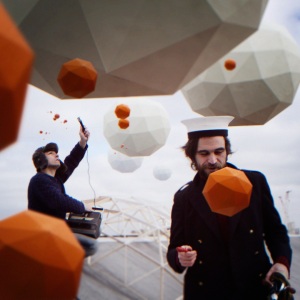 So now let’s talk about the music, a melange of textures and beats that fall over each other, establish patterns, separate and re-integrate.  These are hypnotic rhythms, designed to stun the listener like spinning wheels.  Once upon a time, this might have been called trance music ~ not the bland crossover variety with vocals, but the deep club psychedelica that was capable of distorting time and perhaps even space.  Whenever newer patterns emerge ~ for example, the snares of the title track ~ the energy level increases as the dancer remembers his or her surroundings and plunges back into movement.  To listen is to reach for a flower, again and again, never quite touching it, never quite giving up.  The soul of the recording is always just beyond reach, tantalizing and mysterious. 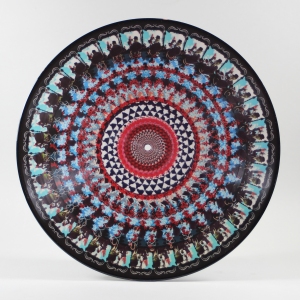 At the end of “Craft”, the entire process seems to break down, patterns disintegrating into audio onomatopoeia.  Is the needle afraid of the spindle?  Restart with the aptly-named “Artefact Recovery Team”, and one will discover something new, an extended ballroom-esque sample that vibrates like an eager raindrop in a cloud.  Such sounds were previously heard only in segments; stepping into the spotlight, they lose their shadows and bask in brightness.  By the end, the piano wins its battle with stutters, setting up the EP’s most immediate track: the booming, pulsing “Solvent Lake”.  This barnstormer is perhaps the most clubworthy track the duo has ever produced: intelligent techno for the masses.  In the final seconds, the sound of a needle being dragged will alarm those who are playing the vinyl; to others, it’s the sound of analog, intensely alive.  (Richard Allen)