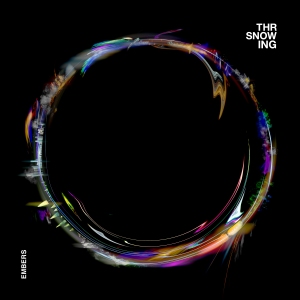 Ross Tones (Throwing Snow) has just released the best set of his young and evolving career.  The only problem is it may be hard to top.  The key fact: Embers is mixed as a continuous set, and like the circle displayed on the cover, connects back to front; two turntables can make the album play as a continuous loop.

Throwing Snow first came to our attention with the amazing video for The Tempest, the standout track from his debut album Mosaic.  At that time, he straddled the line between vocal and instrumental; in describing the album, Boomkat wrote, “vocals have always been a strong part of Throwing Snow’s DNA.”  No more.  To our delight, he is now fully instrumental, and stronger as a result.  While Embers builds on the instrumental tracks of Mosaic (in particular closer “Saltare (Parts 1 and 2)”, the set is more properly seen as a natural progression from the three Houndstooth 12″s he released in the interim, collected as Axioms.  The resemblance of Embers to classic Global Underground mixes can be traced to the fact that DJs such as Sasha featured Tones’ 12″ records in their live sets.

Embers was heralded last November by the double single “Cosms / Cantor’s Dust (Parts 1 & 2)”.  The cover image was a clever piece of a puzzle, a curve that turned out to be a fraction of a circle.  While these tracks were powerful previews, we feared that they might be the standout cuts, as is typical for single releases, especially in the electronic genre.  Our fears turned out to be unfounded; every cut is magnificent.  But like the best Global Underground album mixes ~ Nick Warren, John Digweed, Sasha ~ Embers deserves to be heard as a whole.  If this were not the work of one man, we”d call it one of the best DJ albums we’ve ever heard.

The keys, as mix fans will attest, are variety and flow.  “Cantor’s Dust” provides an example within its grooves; before the second track plays, listeners may feel as if they’re already heard two or three.  From the humble beginnings of fireside crackle, the track proceeds into a spacious array of breakdowns and buildups, incorporating birdsong, deep bass, straight-up techno rhythms and sonic attacks akin to the works of Roly Porter, FIS and the like.  This complexity continues throughout the full album, which benefits from an array of techniques and styles.  Most importantly, it never loses the plot.  One can dance, yes, but one can also listen, following the sonic threads while seeking to identify their edges.

Tones’ intention is to honor the repeating patterns of life.  This in itself is nothing new.  But Tones succeeds where others have failed by mixing the subtle echoes of each piece into the next, an honest reflection of nature.  On paper, winter follows fall, but winter also offers fall-like and spring-like days, moving forward at a pace that is difficult to map until the full picture is revealed.  In like fashion, the tempos of the album change in non-linear fashion, defying the typical logic of a mix, which is to move from slower to faster.  Instead, Embers offers the feel of an entire season, including highs and lows, trudges and triumphs, recollections and hopes.  At any point, the music may double back on itself, recalling a prior theme, reevaluating and recreating itself like a modified memory.  The excitement for the listener is that the themes return in altered fashion, recalling the statement, “no one steps in the same river twice.”  To some extent, this metaphor also applies to repeated plays ~ even though one is playing the same album, one continues to hear new facets ~ physical and emotional ~ in the grooves.  But if one chooses to dance instead, that’s perfectly okay; Embers is an album for the body as well as the mind.  It’s the most exciting release of the young year.  (Richard Allen)