2016, eh…? I say this every year, but I find it increasingly difficult to put these kinds of year-end retrospectives together.  The December rush often means a lot of records get left behind, some newer records get overvalued while those released earlier in the year may be forgotten.  So I try to take a little extra time, wait until my winter holiday is over and then really sit down and try to sort out which records released in 2016 were most important to me and which I think deserve greater attention.

Mainstream music had a strong year with a good number of surprise releases, including surprise EP from Kendrick Lamar, Kanye’s exquisite mess of an in-progress digital release, Beyonce’s second audio-video release, and, most incredibly of all, a truly excellent final LP from A Tribe Called Quest.  Not to mention powerful records from Solange, Radiohead, and Blood Orange, the debut from NxWorries (Knxwledge and Anderson .Paak), Adrian Younge’s The Electronique Void, the long-awaited new record(s) from Frank Ocean, and final testaments from David Bowie and Leonard Cohen.  Dylan won a Nobel, and even the long lost The Diary of J Dilla finally saw release. And that’s just scratching the surface.  It’s almost enough enough to make a person forget all the terribleness that 2016 will no doubt be remembered for…

But here at A CLOSER LISTEN we don’t really concern ourselves with mainstream, or even “indie” music.  Of course, we all have different tastes and many of us do indeed listen to a lot of pop music, but there’s no shortage of outlets already having those conversations.  Even if an album is sure to appeal to our readers we tend to focus on artists who haven’t received so much attention.  Still, we can only do so much, aided as we are by Richard’s disciplined, prolific outpouring of reviews. Our End of Year lists are compiled from staff votes, but we are restricted to only releases that we’ve covered in the past calendar year. So before we are any further into 2017, I’d like just like to share my own personal favorites from 2016, barring popular music and records we’ve already reviewed. Again, this list is not ranked, I make no overarching claims, just 25 records that mattered to me personally. No big surprises but hopefully you might discover something new.

Some of these 25 records come from artists who certainly need no introduction. Autechre, Brian Eno, and Tim Hecker may be well known but they all earned a place in the record rotation this year. Others come from artists we already follow releasing records under a new guise operating in a new style, such as Will Long (putting Celer aside to produce some loose house music) or Inventing Masks (Giuseppe Ielasi’s concrete-take on beat music).  Like much of our favorite electronic music Huerco S.’s most recent LP sheds the grid patterns of techno in favor of the rich textures and loose rhythmic layers of ambient music. This young Kansas City producer has come a long way in a few short years and I’ll look forward to seeing where he heads next. Peter Evans brand of jazz and improv might not be on the casual listener’s radar, but his incredible solo-trumpet album Lifeblood should not be slept on. And on the opposite end of the spectrum Mary Halverson takes her eight-piece ensemble to magical places on Away With You.

Have you all been paying attention to NON worldwide this year? I’ve included records from label co-founder Chino Amobi and affiliates Dedekind Cut (Lee Banon) and Yves Tumor, but there’s just so much else that’s been really special, including tracks from Embaci, Angel-Ho, Nkisi, Rabit, and Elysia Crampton. Self-consciously opposing a status quo that erases the contributions to electronic and experimental music made by people of color, this pan-African/diaspora collective is producing some of the most out-there and forward thinking music I’ve heard all year.

Much has been said about the many celebrity deaths of 2016, which affected our community as well.  We lost such influential and nurturing composers, experimenters, inventors, and teachers  as Tony Conrad, Don Buchla, Pierre Boulez, Isao Tomita, Jean-Claude Risset, Alan Vega (Suicide) and Pauline Oliveros. I had the pleasure of attending a workshop led by Oliveros this autumn not long before she passed, for which I’m very grateful.  I made sure to grab Nessuno, a recording of Oliveros playing three other legendary improvisers together in Bologna in 2011. A rare treat, each of the four representing some of the central improvisational traditions of the 20th century.  Bootlegs have circulated but an official release, with good sound quality, was published in 2016.  In addition to the venerable deep listener, we have Roscoe Mitchell (co-founder of the Art Ensemble of Chicago and AACM), John Tillbury (of AAM), and Wadada Leo Smith.  Smith has continued to produce his best work in recent years, including the truly epic Ten Freedom Summers (2012). His America’s National Parks could easily be included here on this list, as well, but I tried to keep the list to just 25 releases.

I’ll be putting together a ‘best of 2016 mix’ very shortly, and have a few other surprises in the pipeline as well.  My doctoral studies are likely to keep me busy this year, so besides those mixes you probably won’t be hearing too much from me in 2017.  But I do have two Sound Propositions, with Marcus Fischer and Taylor Deupree, coming very soon.  Beyond that, it might be a while, so let’s see if we can’t find some other ways to engage the community around ACL.  Some anniversary events, some collaborative projects, more mixes from readers and friends, whatever else.  Or just get in touch to say hi.  I really appreciate all the continued support and attention. As always, thanks to you all for reading and listening. (Joseph Sannicandro) 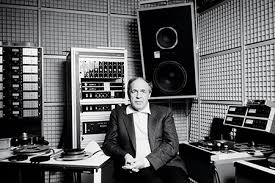