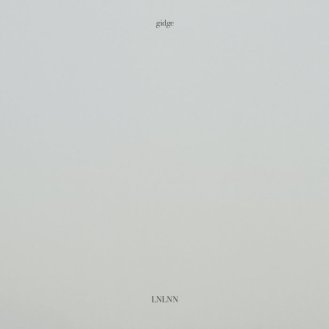 LNLNN sees Swedish duo Jonatan Nilsson and Ludvig Stolterman return to the woods, not only inspired by but embracing the north of Sweden. Gidge also return to their electronic roots, using ambient-touched samples from Lulin while additionally reintroducing sleek, dark rhythms and a bleaker, harsher atmosphere.

Spectral voices snake around the elephantine trees, and beats rattle as if caught inside trinkets, like tiny pebbles grazing a creek of lucid water. In terms of musical style, LNLNN continues on from their debut, Autumn Bells, despite it being album number three. Its swampy and sparse atmospheres flirted with an otherworldly place which was, in reality, closer to home, and that trend continues here. Pockets of entrenched mud and ice-crusted harmonies are interspersed throughout, gently layering the green terrain with a stark, raw beauty. It seems as if the human voice has been cut back, restricted and tamed by a January environment. Hearts no longer sing about falling in love, and the voice is a lot more conservative in its appearance, as if masked by a cluttered whirlwind containing a thousand leaves.

Horns that have been left out in the cold have begun to rust, because they are now tonally darker and just a little off-color so as to be noticeable, and the beats plow through as if trudging through a thick, feet-deep casing of snow. These beats are nothing new to Gidge – it just takes a little time to readjust after Lulin’s ambient leanings. Everything is cold, with the only exceptions being “Lit” and “Midra”. Other than that, the charming harmonies and heartfelt emotions have been well and truly frozen, lacking in a warmth they’d previously freely provided for the slender body of clothed music. They’ve now largely disappeared, replacing illumination and iridescence with ice. Notes shiver along the veins, a part of the music’s network, its life support system, in much the same way that the roots are an essential part of the tree. They are all one.

Chilly piano chords mix in with the vocals, giving the music more of a defined structure. The listener has to acclimatize to the cooler temperature, but it grows and grows with every listen. A shivering vocal occupies the two parts of “Elegy”. The vocal is highly visible, standing out like Little Red Riding Hood. The gathering mist is cold as it swirls around the ankles, but she keeps on walking, her warm body wrapped up in her protective, crimson cloak.

“Hope” closes the mini-album, and it features another beautiful vocal. Its ambient light is dimmer than it was on Lulin, but the track is all the warmer with a reliable beat, giving it a supply of oxygen and energy, pumping the track like a heart full of blood to make it work harder and harder. And the transition works. You’ll need a pair of mittens, because this is the deepest part of the woods. (James Catchpole)