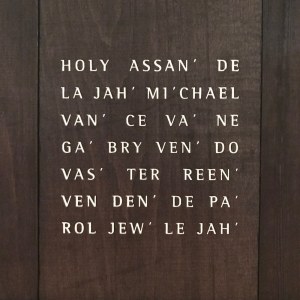 What a beautiful and elegant release.  This is why I love records ~ not just the fidelity, but the sense of surprise (there’s no fast-forwarding through these grooves!), the possibility of elaborate packaging, the expansive art, and in this case, the double white vinyl.  This record is involved.  It’s another multifaceted, all-out release from percussionist Jon Mueller, whose tribal trajectory has exploded since the release of Tongues.  This album is a percussion fan’s dream.  But it’s much more than that: it’s also a historical tribute, and has the potential to send listeners into a meditative trance, connecting them with their forebearers.

Let’s proceed from the outside in.  The deluxe edition is a hand-stained wooden box that contains the records, a cassette, candles wrapped in muslin, a pair of prints and an art card.  The tape offers additional music: the full version of an onsite public concert.  And while the “standard” edition may not contain all of the extras, the cover is still die-cut, the vinyl is still white, the liner notes are still elaborate and the music is still mesmerizing.  Compare the box to the outside of the Shaker Historical Society’s Meeting House in Albany, NY ~ wood meeting wood ~ while the white vinyl reflects its white walls.  Nothing is left to chance.  The home possession ~ and yes, that word is chosen carefully ~ is a totem of the larger space, while the sound is an echo of its ghosts. 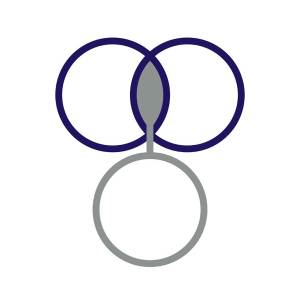 At Shaker meetings, singing and dancing often conjured feelings of spiritual manifestation, which adherents would associate either with darkness or with light.  While the Shakers invited the light to dispel the darkness, there was still something a bit foreboding about the process ~ leaving one’s self so that something else might enter in.  “It’s just the Holy Spirit”, some might say.  But is it always?  This disconcerting question adds layers of interpretation.  What exactly happened to Jon Mueller as he drummed for six hours in this house?  While listening, one understands that the artist was transported, but where, and by whom ~ and who or what took his place?  Was this a spiritual frenzy or simply an intense drum session?  Mueller prefers that these questions not be answered.  Instead, he chooses to channel the same energy that once inhabited this house, and leave the listeners to discuss their own theories. 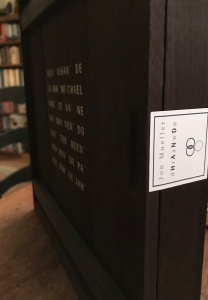 dHrAaNwDn (explained as “hand drawn”, but easily applicable to “drawn hand”) is a tribute not only to the Shaker faith, but to the understanding that music and spirituality are linked.  While many might dismiss even more “primitive” religion ~ for example, that of remote African tribes ~ the age of reason has done a disservice to natural means of understanding.  And just as certain cultures value imbibement as an aid to (temporarily) escaping the physical world, music seems even purer, a connection to bodily rhythms and tempos.  Mueller writes of an earlier epiphany, “it might not even be music itself that I’m actually interested in”, but music as a “vehicle that can be used to achieve particular experiences.”  The album is a document of his experience that in turn may serve as an experience to home listeners, who are invited to open their minds to something more. 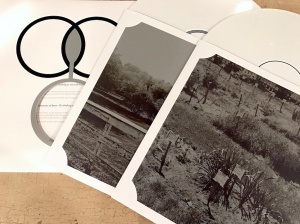 While playing, the artist loses himself in the music like a surrendering disciple.  One senses that at a certain point, he feels rejuvenated, his wrists no longer weary; that he is upheld by an unnamable force.  For the most part, he drums swiftly and steadily, but on occasion stops and starts as if caught in wonder.  Could percussion be a holy language?  In his hands, it is.  A closing drone seems to echo the feeling of possession; the drums stop, but the spirit continues to animate the body.  (Richard Allen)