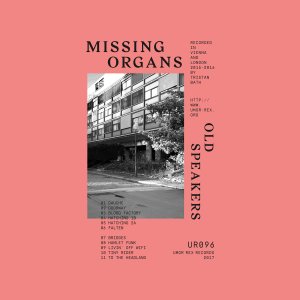 Moody soundscapes, crisp electronics, suspense film synth and layered voice: the four artists in Umor Rex’s March Batch might not attend the same parties, but they are united here by date and design.  This may be the label’s best batch ever.

The fun kicks off with Missing Organs, whose Old Speakers is identified as Tristan Bath’s “Brexit album”.  Uh-oh, you know what that means:  anger.  Yes, those old speakers are tested to overload by a series of distorted drones, industrial beats and a sense of barely restrained chaos.  With this release, we continue a see movement in the direction we predicted in our article, Where Will Music Head Next?”.  The world is not in a very good place, and the thought of freedoms under fire has led to a flash of productivity on the part of writers, musicians and other artists everywhere.  But as harsh as conditions may be, this artist finds time for a bit of nostalgia; “Doorway” is either a look back or a look forward depending on one’s perspective.  “Hamlet Funk” seems to suggest that even dark moods have an end point.  And in light of the subject matter, the fact that violins, vocal samples and industrial beats co-exist is a sign that disparate cultures might get along as well.  Bath doesn’t mean to be this subversive; he’s fed up, yet hopeful.  Fragments of field recordings and unfinished melodies are woven into a surprisingly smooth quilt, as if to suggest that our collective frayed attention might result in a shared focus.  Is this too much to read into the music?  Then simply enjoy Old Speakers for what it is on the surface: a cornucopia of creative sound. 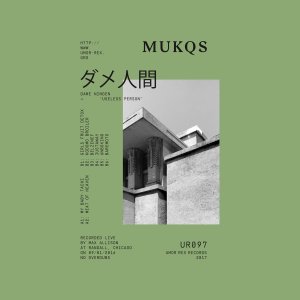 Mukqs‘ ダメ人間 (Useless Person) is as bright as Old Speakers is dark.  The pinging of modular synth is joined by anime samples in a one-take work, but that’s selling it short; a lot of advance planning went into this set.  Imagine instead a performer preparing for an opening concert slot, knowing he had to capture the attention of the audience or be forever buried in the shadow of the main act.  And afterward, the main act complaining, “I can’t follow that!”  Max Allison is also a third of Good Willsmith, another original band that we’ve followed on and off over the years, but one would never guess this from the music.  Ten-minute opener “My Baby Tachi” is anything but useless; it’s a joyous expression of happy sound, awash in music box timbres and vapourwave sensibilities.  When the drums finally enter seven minutes in, the track rises to an even higher level, and yes, one may get up and dance.  Not so “Meat of Heaven”, which is like the simultaneous firing of multiple video game blasters.  The melodic and disruptive continue to trade places on Side B, battling for dominance, until the brief closer unites the two forces, angels and monsters dancing awkwardly, grinning without a beat. 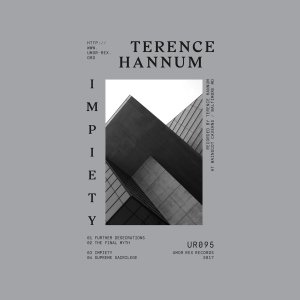 Slower, softer and shorter is Terence Hannum‘s Impiety, whose sound, like that of the tape above, creates a contrast to its title.  Hannum, who is also a member of Locrian, describes this as “unholy sacred music”, but it doesn’t sound unholy.  Its sacred nature comes out, despite the fact that Hannum is trying to make a case against faith.  There’s great irony to be found in this impression, as his vocal layers imitate those of Dead Can Dance and to a lesser extent, Ian William Craig, augmented by shaker sounds and other light augmentations.  More sinister styles of such music exist on the Cold Springs label, where they are labelled dark ambient; Hannum seems too caught up in the beauty to ruin it.  All this leads to great listener satisfaction, although this reviewer can’t help but wonder what the artist will think of the review: sorry to say you’ve given me a warm, religious feeling.  Perhaps it’s better to say that we understand the artist’s point: religion has been at the heart of much of humanity’s hurt, and is not always to be trusted.  If there’s no higher being, then there’s none for Hannum to offend; and if there is, he may have accidentally impressed that being with this beauteous set. 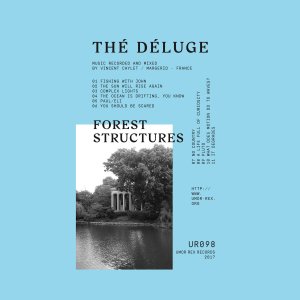 Finally we arrive at Forest Structures from Thé Déluge (Vincent Caylet), the artist formerly known as Cankun.  Like Mukqs, he’s modified his sound for this release, choosing to concentrate on analog equipment and creating a warm, wet feeling akin to that of a forest in deep summer.  To borrow the words of Robert Frost, these woods are lovely, dark and deep.  The timbres are psychedelic, but not drugged.  Distortion creeps in around the edges, but the centers are crisp.  The sounds are blown around by the wind and accumulate in piles as additional notes swirl in the stratosphere.  For the third time in four releases, the titles seem reversed in execution; “You should be scared” is emboldening, its outer wall of feedback like a suit of armor over an innocent heart.  By the end, the artist has produced a sense of wandering without being lost; he’s travelled far and returned without one wrong turn.  (Richard Allen)