Those Who Walk Away ~ The Infected Mass 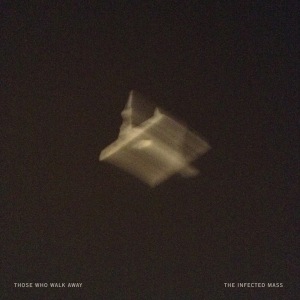 Full disclosure:  I lost a friend in Pan Am Flight 103 and two acquaintances in the Twin Towers, so I’m not sure I like this album.  Matthew Patton (Those Who Walk Away) lost a brother in a plane crash, and writes, “I don’t know why I am doing something that feels so wrong.”

Haunted by his loss, Patton found himself drawn to cockpit recordings of doomed flights.  Two are included on this album, which slowly unveils an uncomfortable elegy through breath and blood, neither of which is a metaphor.  The presence of “ghost choirs” and “ghost strings” honors the ghosts of those who died; the sadness is a tribute to those who walked away.  The music was recorded by musicians in Winnipeg and Reykjavik, the latter borrowed from the Iceland Symphony Orchestra.  As one might expect from such origins, the strings are solemn, elegant, and professional; reverence is required, and reverence is given.  But just as the composer’s memories are “decayed”, so is the music, which has been made subject to a form of erasure. What we hear is both less and more than what was played.  Patton’s process comments on memory, honor and repetition, with the music a stand-in for the mind.  One senses that the production proved therapeutic, if not entirely healing; the grief continues to drip after the last chord has disappeared.

So now to those recordings.  We know what’s going to happen in advance, so we feel an awful dread, nearly ghoulish in intensity as we continue to listen.  Should these conversations really be used in an artistic setting?  Is it always “too soon”, or never?  I am reminded of my experience with the movie “United 93”.  After seeing it in the theatre, I thought it might be the greatest film I’d ever seen; when it was released on DVD, I picked it up immediately; and over a decade later, it remains in cellophane.

The first flight, Alaska Airlines Flight 261, crashed as a result of failed maintenance.  In a cruel twist, the pilots stabilized the flight before it failed for a second and final time.  “And he’s just hit the water”, a nearby pilot declared.  Everyone onboard was killed.  On the album, the music ends, followed by an ominous hum, signifying pregnant silence.  And then the sound of wind and the tentative re-entry of the strings.  The listening experience is powerful, but produces guilt, a guilt that is then exacerbated by the second set of recordings, these from United Flight 232 whose crash was also caused by failed maintainance.  While one hesitates to call this a “better” outcome, 111 people were killed, while 185 survived.  “Whatever you do, keep away from the city”, the pilot asks ATC.  The sense of tension is palpable as the recordings unfold, the silences arriving quicker, the orchestras unable to play until they gather their emotions, the wreckage strewn across the grass, all communication eradicated.

The recording is not enjoyable, but it’s effective.  To listen uncomfortably is to zero in on the nature of grief, especially sudden grief.  The mourning never really ends, it only mutates.  As much as these dark imaginings tumble in the mind, they never truly settle.  As an expression of such grief ~ playing what cannot be named ~ Patton’s work is a success, albeit an apologetic one.  (Richard Allen)

Tags: Constellation, Richard Allen, The Infected Mass, Those Who Walk Away